Earlier this year Moray Melhuish, Principal Consultant of Annet Business Consultancy discussed the comparative impact of COVID on the production of offshore wind and offshore oil & gas, the three – or possibly four – industrial revolutions and applications for hydrogen. He concluded that there might be a more fundamental shift taking place, and wondered whether this is the start of a new industrial revolution.

We have all experienced the reducing cost of technology in our daily lives. For example, take a look at the graph below which shows the decrease in the cost of digital storage. 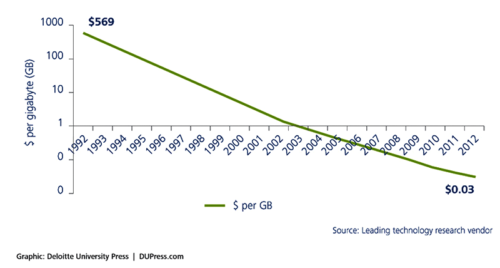 This may be a particularly dramatic illustration, but can a similar collapse in cost be replicated in the green hydrogen industry?

As Moray wrote in the first article Industry 5.0: The Hydrogen Revolution? – Ocean Energy Resources, the cost of green hydrogen is significantly higher than blue or grey hydrogen. Achieving cost reduction will require investment in electrolyser technology research, and in generation of low-cost renewable energy – by which he means primarily offshore wind due to the scale of opportunity and speed of deployment, but also other promising technologies such as wave and tidal.

Electrolyser cost will only reduce as deployment volumes increase, and new technologies are developed. This investment in economies of scale, and technologies such as PEM and more recent addition of solid oxide electrolysers, will only come about if government and market support is provided for their development.

Support hydrogen industry
The market for green hydrogen, and its potential to transform industries is being taken seriously by many. Goldman Sachs believes that the green hydrogen market could be as much as € 10 trillion by 2050. The EU is targeting € 400 Bn of investment by 2030, and European nations have rolled out their own strategies, including Germany (€9 Bn), Spain (€ 8.9Bn) and France (€ 7Bn).

Trade association Renewable UK recently called upon the government to set a target of 5GW of renewable electrolyser capacity by 2030 and doubling this by 2035. Additionally, the UK should set its sights on a cost reduction target of £2/kg of green hydrogen by 2030.

It is clear that the UK government has heard the call for action, not wanting to be left behind and conscious of the spotlight it will be under during COP 26, to be hosted in Glasgow in November 2021. Boris’ 10-point plan for a ‘Green Revolution’ rightfully received much attention – so let’s take a look at the UK plans for Hydrogen.

The 10 point plan leads with the advancement of offshore wind, but the second point is ‘Driving the Growth of Low Carbon Hydrogen’. This of course does not necessarily mean ‘green’ hydrogen, as power could be supplied by nuclear energy instead of renewables, but it announced the creation of a £ 240 Million Net Zero Hydrogen fund and business models to deliver over £4 Bn of private investment in the sector by 2030. In creating these business models, we can only hope that the government be inspired by the offshore wind industry, which initially thrived due to governmental subsidies, but are now routinely built with no subsidy required.

Comparison
And the £ 240 million – how does it compare with other government projects? Two high profile, low carbon projects are Hinkley Point C and HS2. Let’s take a look and see how the investment in these projects compares with the government investment in low carbon hydrogen.

Comparing these projects visually would look something like this:

Project comparison: Hinkley Point C
Hinkley Point C is the project to build one nuclear power station, the UK’s first since Sizewell B in 1995. The construction costs are now reported to be £ 22 billion, of which the announced government contribution is £ 2 billion. Moray isn’t sure how to calculate or represent end-of-life clean-up costs, so he doesn’t try either.

Project comparison: HS2
HS2 is the project to build one high-speed rail link between London, Birmingham and Leeds, at a reported cost of £ 106 billion for the 351 mile project. By Moray’s calculations, that is around £ 188,000 for each metre of track.

When comparing the commitment of the UK government to HS2 with their commitment to H₂, you can see that the much-publicised government support for low carbon hydrogen would build just 1.3 km of track.

Comparing the two projects visually, we have:

While government support for low carbon hydrogen – in cash terms at least – has been underwhelming to date. There are other support areas offered under the 10-point plan from which low carbon hydrogen technologies may benefit – including £ 1 billion for advanced nuclear and clean hydrogen and £ 120 million for 4,000 zero-emission busses (some of which may be EV’s). The split between hydrogen technologies and ‘others’ is as yet unclear. Let’s hope the private sector incentives are less opaque, and more impressive.

Despite the low level of government support to date, there are some inspirational and promising green H₂ projects in the UK:

In global terms, hydrogen is certainly making its mark, and there is no shortage of impressive projects including:

Green Hydrogen – the new Industrial Revolution?
Bloomberg NEF believe that the global hydrogen market could be worth $ 700 Bn by 2050. Green hydrogen has the potential to transform our industries, economies and the health of our urban population. But it will not happen alone.

We need push and pull incentives to enable and accelerate this energy transition. This has to include investment in technology development and infrastructure. This will have to be funded, most likely by a carbon tax on industry and transportation, which penalises polluting alternatives. Tariffs and levies need to be adjusted to account for the ‘carbon-reality’ of industrial fuels to create a level playing field for further investments in hydrogen transport sector.

There has to be a volume market for the hydrogen produced. Given the health benefits to our cities of an energy storage technology which emits only water at the point of use, and the health concerns of diesel vehicles in our cities, the displacement of heavy transportation with hydrogen fuelled alternatives is a near-term priority.

This can also create opportunities and improvement for our existing energy industry. Who better to understand the engineering challenges of hydrogen embrittlement, flammable gas production, distribution and financing than the companies and professionals already engaged in doing just that.

The International Council on Clean Transportation foresees a halving of the cost of green hydrogen by 2050 – but we need to do better than that. We need continued investment in offshore wind and other low carbon energy generation, growth in the volume of green hydrogen produced and a distribution network to ensure that it can be used where and when required. This will require more government support than just over a kilometre of HS2 track.

If a substantial investment is not made in the UK hydrogen industry, it risks losing out.

Only national government can institute the level of change required for material change – but the current level of commitment is just not good enough. An investment on the scale of HS2 would be a great start – but instead of saving time on the journey from Leeds to London, Industry 5.0 can save something much more valuable – our energy industry, and indeed our planet.