Moray Melhuish, Principal Consultant of Annet Business Consultancy recently looked at the comparative impact of COVID on the production of offshore wind and offshore oil & gas, and speculated on their prospects for recovery. He concluded that there might be a more fundamental shift taking place, and wondered whether this is the start of a new industrial revolution? Ocean Energy Resources (OER) asked him to write down his exact thoughts. In this article Moray looks at the four industrial revolutions, and applications for hydrogen as well as the production methods and costs. In a second article, published in due course in OER, the UK-based consultant will look at the potential impact and support available for hydrogen.

Industrial Revolutions
It is generally accepted that there have been three – or possibly four – industrial revolutions to date, each one transforming how we work and live.

The first, which began in England in the late 1700’s saw a shift from artisanal production methods to mechanization, with the building of giant factories powered by steam and water for the textile industries. This brought with it a boom in population and the dramatic growth of cities as a result.

The second, was driven by the combustion of hydrocarbon fossil fuels, particularly of gas and oil, but also the transmission of electricity for industrial and domestic consumption. This led to unprecedented innovations including the car (Karl Benz, 1885) and aeroplane (Wilbur and Orville Wright, 1903) which went on to transform the world as we know it.

The third came about after the second world war. A result of electronic innovation, with the advent of computing and telecommunications, which have revolutionised analysis of data and designs.

The fourth was the advent of the Internet, which has accelerated knowledge sharing and transformed the global economy.

But are we on the verge of a more fundamental shift, from the combustion of scarce fossil fuels, to the use of plentiful and non-polluting energy?

Potential for hydrogen
Hydrogen today is largely used as a feedstock for refineries, and in the production of ammonia. IEA statistics show that global H2 demand has risen consistently since 1975, and predictions of future demand show that it is likely to grow, either as a fuel in its own right, either burned in gas turbine engines or converted into electricity in a fuel cell, or combined with carbon dioxide to create a synthetic fuel.

Hydrogen is an extremely light and energy dense and when burned produces only water as its by-product. Unlike natural gas, hydrogen has to be manufactured – either split from natural gas, or split from water – and as such can be seen as an energy store rather than an energy source.

The potential for hydrogen has really been igniting the imagination and hitting the headlines of late.  For several years now we have seen hydrogen busses, but momentum has really picked up with the announcement by aircraft manufacturer Airbus that it intends to deliver the first hydrogen powered aircraft by 2035.

Our subsea industry is beginning to recognise the potential of hydrogen for propulsion too, with technology pioneer Cellula Robotics announcing sea trials of its incredible Solus-LR AUV, which harnesses a marinized automotive hydrogen fuel cell, to achieve over 2,000Km range.

In this application, Hydrogen is enabling a true step change in offshore performance, enabling the subsea vehicle to be launched and recovered at a boat ramp rather than the typical AUV, which has to be recovered and recharged to an offshore vessel every 24-48 hours.

The H2 powered Cellula Solus AUV, in service today, has the potential to collapse the carbon footprint of offshore operations.

The Airbus Zero-e concept, which could enter service in 2035, has the potential to collapse the carbon footprint of air travel.

Production
Let’s now look at the production methods of hydrogen and costs. Unlike hydrocarbon fuels, hydrogen is not a source of energy, but rather a store of energy. Hydrogen must be manufactured, cracked from hydrocarbons such as natural gas or split from water. This is an energy intensive process, with an impact on the cost per kilo for each hydrogen type

Grey Hydrogen
According to the IEA, hydrogen today is ‘almost entirely supplied from fossil fuels, with 6% of global natural gas and 2% of global coal going to hydrogen production’. The true cost of H2 production today is measured not in £GBP alone. The report continues: “As a consequence, production of hydrogen is responsible for CO2 emissions of around 830 million tonnes of carbon dioxide per year, equivalent to the CO2 emissions of the United Kingdom and Indonesia combined (IEA Hydrogen: Tracking Progress 2020).”

So, perhaps Hydrogen is not as environmentally friendly as it would first appear – but what steps are being taken to reduce the massive carbon footprint of hydrogen production?

Blue Hydrogen
Blue Hydrogen is obtained from natural gas, using Carbon Capture and Storage (CCS) to reduce carbon emissions to the environment. This technology does have its detractors, as the carbon is still present, it has just been hidden away – typical plans are for the reinjection into disused offshore gas fields for long term storage.

CCS is a logistical, technical and commercial challenge, which is reflected in the higher cost for each unit produced.

CCS requires transmission infrastructure to transport the carbon to its storage location, and again, this is not as simple as it may seem. Much of the North Sea gas infrastructure is in generally poor condition. Each time the price of oil and gas falls, one of the first budgets to be hit is maintenance.

Even when new, much of the offshore infrastructure would not have been suitable to deal with the injection and storage of CO2 due to the metallurgy involved. Rather than providing an opportunity for the use of late life assets, extensive investment in infrastructure may be required, significantly in excess of only the creation of transmission infrastructure from the point of capture to the point of storage.

Bear in mind, that this is undertaken in the context of rapidly falling costs of green energy, and particularly offshore wind, which can be used to split water into hydrogen and oxygen, and does not require the additional cost of CCS.

CCS innovation is essential, with the IEA announcing in September that CCS projects are required in order for the world to meet its climate targets.

Despite the challenges, progress is being made on CCS. Recent announcements in the Humber region are encouraging, with companies including Equinor, Drax and Vitol aligning to develop the technology and convert one of the highest CO2 emitting regions into a carbon sequestration technology leader.

Green Hydrogen: Democratisation of Energy?
The potential to use renewable energy to split water into its constituent hydrogen and oxygen is substantial. While the costs are high, once proven this will provide countries with the ability to generate and store non-polluting energy even if they have no ready source of hydrocarbons for energy production or rare earth minerals for battery storage.

A key enabler for green hydrogen is the offshore wind industry. 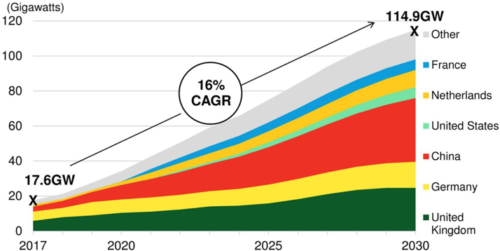 Set to achieve 114.9GW of installed capacity by 2030, up from 17.6GW today, offshore wind is providing ever cheaper and lower carbon energy. The criticism often levelled at this booming industry is that the power is not predictable enough, generating either too much or too little to suit demand.

Using wind energy to generate green hydrogen enables the power of the wind to be stored for later re-use. It is little wonder that ORE Catapult and the Offshore Wind Industries Council has estimated that green hydrogen could be worth as much as £320bn for the UK economy, and support 120,000 jobs, by 2050.

In economic terms, this is not ideal, because the production of hydrogen is ‘peaky’, which results in the electrolyser not necessarily used to its full capacity, and therefore higher cost per unit, however despite this challenge it is seeing growing investment.

Investors in this sector include Scottish Power (with a 10MW Electrolyser in Glasgow, Scotland), Orsted (100MW ‘Green Ammonia’ plant close to the Borssele offshore wind farm in The Netherlands), Shell (with a 10x increase in green hydrogen planned at its Rhineland refinery in Germany), ITM and Orsted (with the ‘Gigastack’ proposal for the Humber region in the UK), ERM (with plans for a 100MW hydrogen-producing windfarm by 2030).

The ICCT predicts that using surplus renewable electricity in this manner can reduce the cost of green hydrogen today, from £8.31/kg today, to £4.66/kg by 2050.