There are clear indications that the aims of the Directive on the Safety of Offshore Oil and Gas Operations have been met thanks to its transposition by EU Member States, according to the Commission’s report, recently published on the assessment of the directive. END_OF_DOCUMENT_TOKEN_TO_BE_REPLACED

The Mediterranean Sea region is becoming increasingly interested in the application of clean energy technologies, both on- and offshore. END_OF_DOCUMENT_TOKEN_TO_BE_REPLACED

Russian Energy Minister Alexander Novak is set to be promoted to deputy prime minister amid a government reshuffle, while retaining his role as the oil-rich nation’s OPEC+ negotiator. END_OF_DOCUMENT_TOKEN_TO_BE_REPLACED

Having secured more than the necessary 270 electoral votes, Democratic presidential nominee Joseph R Biden was elected President of the United States on November 7, 2020 – four days after the US election. END_OF_DOCUMENT_TOKEN_TO_BE_REPLACED

Hydrogen and carbon capture, utilisation and storage (CCUS) are two priority areas of a new deal signed on October 26 by Australia and Singapore, as the two countries look to advance cooperation on low-emissions technologies and solutions. END_OF_DOCUMENT_TOKEN_TO_BE_REPLACED

“This week, together with the European Commission and ministers from Denmark, Estonia, Finland, Lithuania, Latvia, Germany and Sweden we have signed the ‘Baltic Sea Offshore Wind Declaration’, inaugurating close cooperation between the countries of our region,” Michał Kurtyka, Poland’s Minister of Climate highlighted during the Pomeranian Offshore Wind Conference. END_OF_DOCUMENT_TOKEN_TO_BE_REPLACED

Moon visited a wind power plant and a turbine research center on the southwestern coast in his first field inspection since unveiling a ‘New Deal’ policy to recover from the economic downturn caused by the coronavirus crisis.

“The government’s goal is clear and is to become one of the world’s top five offshore wind energy powerhouses by 2030, taking advantage of our geographical advantage of being surrounded by water on three sides,” Moon said at the wind farm in Buan, about 280 kilometers southwest of Seoul.

The government aims to expand the nation’s offshore wind power capacity to 12 gigawatts by 2030 from the current 124 megawatts, he noted.

During his visit, central and local governments, businesses and local residents signed a memorandum of understanding to develop the plant located in two counties of Buan and Gochang, North Jeolla Province.

The plant operating since July 2019 is the largest among the nation’s three offshore wind farms. Two others are located in South Jeolla Province and Jeju Island. 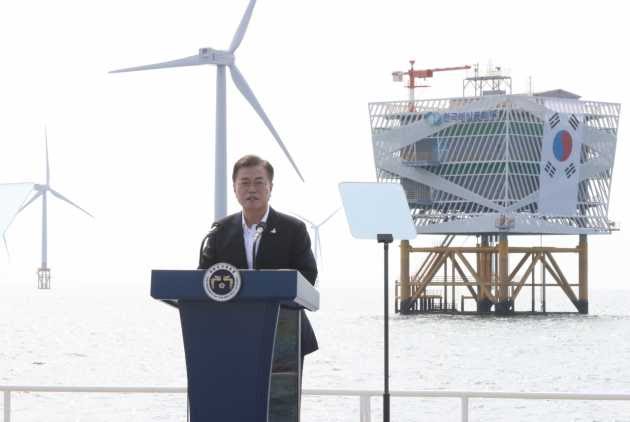 The European Union (EU) has unveiled their plan to become world leaders in hydrogen production that will see 6 gigawatts of renewable hydrogen produced via electrolysis by 2024. END_OF_DOCUMENT_TOKEN_TO_BE_REPLACED