The Chinese market looks set to build some 20GW new offshore turbines in the coming six-year. And it is even likely that China will knock off the UK from the Number 1 spot for cumulative installed capacity still this year. The pressing question is: how can European contractors benefit from this significant market potential? The opportunities are huge, but the distance and cultural differences make China seem like a tough market to enter. The culture as well as the different market infrastructures and rules applied, are so far from Europe that entering the Chinese market looks already an almost hopeless mission in advance. You must learn to embrace the cultural and business differences to become accepted. You must try to understand the do’s and don’ts and the hierarchy of the Chinese companies you are meeting. Only a handful international players have managed so far to win the trust of Chinese clients. SPT Offshore (SPT) from Woerden, the Netherlands, is one of them. Ocean Energy Resources spoke to Bao Zeng, business development manager. 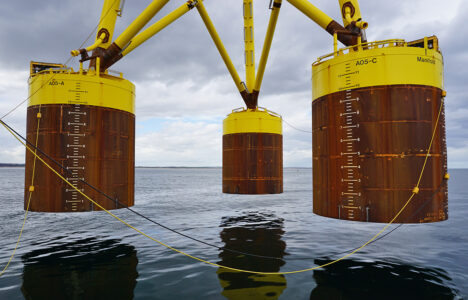 As an offshore contractor SPT is specialised in suction pile foundations and ‘Self Installing Platforms’ (SIPs) for the development of marginal oil and gas fields and offshore wind farms. The SIP platform can be used for small to heavy topsides in up to 60m water depth and are therefore also attractive for offshore substations. The SIP is towed on a flat barge to an offshore field and following lowering the legs and suction piles to the seabed using strand jacks, the platform foundation is effected using suction piles. Thereafter the topsides is lifted using the same strand jacks. The great advantage of the SIP concept is that the use of nowadays scarcely available innovative heavy lift jack ups is not required for installation purposes. This leads to considerable cost reductions and an earlier return on investment. Bao Zeng: “As the SIP can be fabricated locally and installed using local flat barges and support vessels, the local content is maximised, which is often required by the self-sufficient Chinese market. All these advantages enable the use of the SIP concept off the Chinese coast very attractive, but the concept is also quite competitive in the North Sea and off U.S. shores, where a fleet of Jones Act-compliant vessels is needed,” he added.

Born in China, Bao Zeng studied at the Ocean University of China in Qingdao and the Cranfield University in the UK from 1999 to 2005. After successful completing of his education, he worked as a project engineer for CNOOC, ConocoPhillips China, Bluewater and the China Petroleum Pipeline Bureau before joining SPT in Holland in 2016.

An important feature of SIP and suction pile jackets (SPJ) is that impact pile driving is not required, and that the handling of heavy, costly, and sensitive pile driving hammers is avoided. The SIP can be installed by using standard seagoing tugs and a 4-point moored DSV or a small work barge. The concept consists of 4 legs each supported by a suction pile, supporting the topsides deck, connected to a space frame structure at the base. The platform is transported and installed from a standard flat top barge, which are relatively inexpensive to hire. After installation, the barge is removed and demobilised. Decommissioning of the SIP is basically a reversed installation. 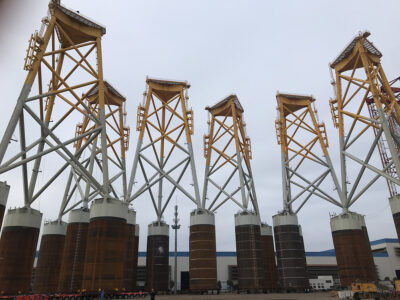 Another important part of SPT’s scope are suction anchors, which be used for taut and semi-taut moorings for FPSOs, buoys, TLPs, floating wind turbines and the like. Bao Zeng: “When I started working for SPT, the prospects for Chinese orders were completely zero. So, I spent a lot of time upgrading the image of the suction pile technology in general and more specifically that of SPT. With some pride I can indicate that, with the full support of the SPT management, I have succeeded in this mission and convinced my former colleagues at CNOOC of the many benefits of our special technology. Within two years’ time, we secured contracts worth more than 10 million euros. 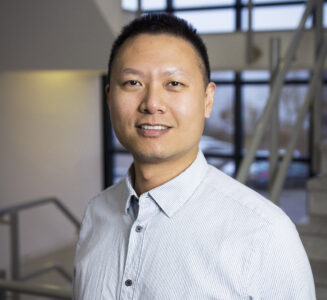 In July last year SPT signed a contract with the Chinese engineering and construction company Yongfu Power Engineering for both the suction pile jacket design and suction installation services. It concerns the Fujian Waihai Offshore Wind Farm project. The windfarm is located approximately 50 km offshore of the capital Fuzhou of the Fujian province, in the southeast of China. The water depth within the wind farm area varies from 37 to 45 meters. The suction pile jacket installation will be done by CCC – First Harbor Engineering Company using SPT Offshore’ SAPS-007S suction spread and crew. SPT Offshore cooperates closely with her Chinese partner Yongfu Power Engineering.

According to Bao Zeng the main problem for many foreign companies is that there is hardly any drive for an early involvement in Chinese projects. Zeng: “If you have not been involved in a project from the start, you hardly stand a chance. It is impossible to step in when the plan is already halfway. China is one of the largest countries in the world. Each province, which borders the sea, has its own design and installation requirements. This means that, in addition to conversations with the end client, a great deal of energy must also be invested in talking to as many local engineering firms, contractors and construction yards as possible. Communication is the key word. China has its own culture of doing business and that differs considerably from the European way. It can be quite frustrating if you do not understand their way of doing business. The word contract alone has a completely different meaning. As SPT we have proved that there are opportunities for foreign companies, but you must find the right doors to open, you must find the right partner and you must generate trust. Chinese are quite open minded and not afraid to start something new. We have entered into partnerships with engineering houses that believe in our concept and technology. Besides these engineering houses are motivated to express their confidence in suction pile technology in a convincing manner to all other local parties involved in whatever offshore project.”

A striking difference between China and Europe is that contractors are only given a period of two weeks to tender. Furthermore, the Chinese developers impose record breaking lead times to build the jackets and structures of only 2-3 months. This applies for the entire supply chain, be it foundation builders, turbine manufacturers, cable suppliers or T&I contractors. According to European standards this requirement does not seem realistic, but Chinese contractors are used to such enormous short lead times. They don’t know any better and therefore do not make a big deal out of it. European parties are doing everything they can to exclude any risk, while Chinese contractors are prepared to take risks. That’s in their DNA.

Another requirement that is tough to meet by foreigners, is the restricted design period of max three months. Not many European contractors can do that or even want to do that. Bao Zeng: ”Normally SPT needs six months to design a suction pile but thanks to our early involvement in Chinese projects nowadays and hard work by my colleagues, we managed to halve the detailed design period to three months.”

Floating wind is another market segment in China, SPT is focussing on. Bao Zeng believes that floating offshore wind is the next wave in China in renewable energy. “We are already talking to several engineering companies and developers about the concept they prefer and the many benefits of suction pile mooring systems for floating turbines. Typical of China is that once a decision has been taken to develop a floating wind farm, it can proceed very quickly. So, at this very moment we are already working on several designs to anticipate directly if a tender for a total floating turbine including mooring solution is issued.

The focus of this particular article is largely on the Chinese market, but all advantages of the SIP concept and the suction pile jackets (SPJ) do offer great advantages for use in for example the North Sea and off U.S. shores.