The federal government of Germany should take a firm decision to ramp up ‘green’ hydrogen and to accelerate the expansion of wind energy and other renewables.

Too large a share of imports and too few renewables make the future energy system more expensive.

The federal government should consistently rely on climate-friendly ‘green’ hydrogen and only consider a supplementary import strategy in the long term. In this way, the government could combine climate protection with jobs and added value.

The Federal Ministry of Economics, by contrast, relies on hydrogen from fossil fuels without good cause and on a large scale of hydrogen imports without planning a domestic market for ‘green’ hydrogen that relies on wind energy and other renewables.

According to a recent Agora Energiewende report, the federal government needs to achieve 25 to 28 gigawatts of offshore wind by 2030 and to significantly accelerate the expansion of onshore wind to meet its goal of a 65% share of green electricity in the same period.

With its hydrogen strategy and the upcoming Federal-Länder agreement on the expansion of renewable energies, the federal government will set the course for important industrial and climate policy developments.

The Federal Ministry of Economics’ proposal to only use 20% of “CO2-free” hydrogen in 2030, which also includes hydrogen produced conventionally from natural gas and coupled with carbon capture and storage (CCS), is problematic for two reasons: Firstly, the low proportion of CO2-free hydrogen is a major problem for the climate. On the other hand, the future market of ‘green’ hydrogen will largely bypass Germany. “Without a domestic generation market for ‘green’ hydrogen, the industrial production of components and R&D for this technology will also have a very challenging time in Germany,” says WAB e.V. managing director Heike Winkler to Ocean Energy Resources. WAB members already offer many solutions for a quick and sustainable ramp-up of ‘green’ hydrogen.

For this market ramp-up, the federal government will need to opt for a significantly stronger expansion of wind energy and other renewables. The current expansion of renewables is not even enough for the climate targets in 2030, let alone for the additional production of green hydrogen. On- and offshore wind are already the cheapest forms of energy generation in Northern Europe according to Bloomberg New Energy Finance. “We are committed to support an ambitious production of ‘green’ hydrogen in Germany. To achieve this ramp-up, the federal government needs to remove the regulatory obstacles to ‘green’ hydrogen production. At the same time, the federal and state governments need to make sure that there are sufficient areas available for onshore wind expansion, that planning and approval procedures are fast, and that their expansion targets for offshore wind energy are significantly increased,” explains Heike Winkler.

The report released by Agora Energiewende shows that in order to meet Germany’s climate targets for 2030, the capacity for offshore wind in the German North and Baltic Seas needs to be increased from a current maximum goal of 20 gigawatts to 25 to 28 gigawatts in 2030. At the same time, either the annual solar expansion needs to be more than doubled to 10 gigawatts, or the expansion of onshore wind energy needs to rise to an annual 4 gigawatts. If all of this fails, electricity will become more expensive. WAB Chairwoman Irina Lucke: “WAB asks for a long-term, reliable expansion path of at least 35 gigawatts of installed offshore wind power by 2035 and at least 50 gigawatts by 2050.” The potential in German waters accounts to at least 57 gigawatts in that period.

“An ambitious and reliable expansion path for offshore wind ensures a stable home market that companies in Germany need in order to utilize their existing production capacities, to tap their export potential and to create more jobs in the long term,” adds Heike Winkler. This also applies to the ‘green’ hydrogen economy.

“It’s all about planning security! Electricity generation from renewables now needs to be accelerated and the first ‘green’ hydrogen projects need to be facilitated.”

New offshore wind projects need to be put to tender as soon as possible in order to mitigate the ‘thread breakage’ that has already occurred and to secure threatened jobs. It is a major burden for the offshore wind supply chain if there is almost no expansion in Germany in the early 2020s, while orders for the German market are not expected until the end of the decade.

For the long-term expansion of offshore wind power, the European Green Deal, which foresees up to 450 gigawatts by 2050, may provide guidance for the German government. To date, only the British government has scaled up its plans in a similar order, laying the groundwork for expanding offshore wind power to up to 75 gigawatts in 2050. Heike Winkler: “The Federal Government could only make the transition to a climate-neutral energy and economic system with similarly ambitious planning. Long-term planning makes it possible to exploit the economic potential and to create and secure jobs.”

As an exporting nation, Germany should also invest in an international hydrogen infrastructure at an early stage and secure sustainable hydrogen supply routes. However, a high import share makes hydrogen a cost driver for the energy system. 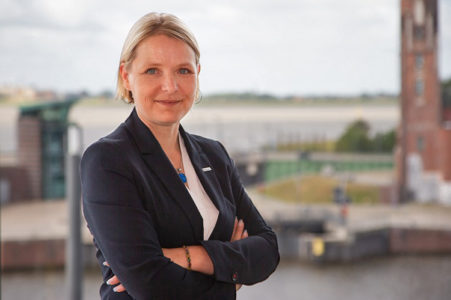