South Korea will launch a pilot project to combine an offshore wind farm with aquaculture, as it pushes to tap the unlimited potential of water, which surrounds the country on three sides, as a future source of energy.

The project, set to kick off in the second half of this year, involves a 60-megawatt wind turbine foundation installed in waters off Buan, North Jeolla Province, integrated with artificial reefs and aquaculture systems. The trial-run will last until Dec. 31, 2022.

In Korea, it will be a prelude to a massive rollout of wind turbines along the southwestern coast, where the livelihoods of many locals depend on coastal fishery. The government plans to build an 8.2 gigawatt offshore wind farm off Sinan, South Jeolla Province, by 2030, which it says would be the world’s largest of its kind. The 48.5 trillion ($42.9 billion) won project would have around 1,025 8-megawatt wind turbines installed. 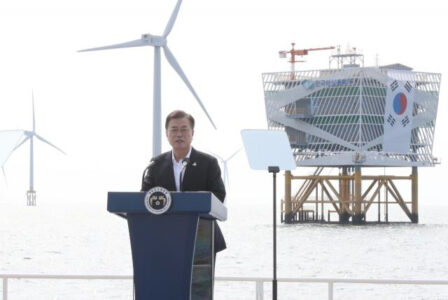 President Moon Jae-in delivers an address during a visit to an offshore wind
power plant in Buan, South Jeolla, on July 17, 2020. (Yonhap)

The demo project was decided last July by the Industry Ministry, the state-run utility Korea Power Corp., North Jeolla Province and representatives of Gochang County and Buan County. It aims to develop a business model that promotes the coexistence of offshore wind farms and the livelihoods of local residents.

Kepco runs a demonstration wind farm complex near waters off Gochang and Buan, and a government survey has shown that the prime reason why local residents oppose such facilities was because they fear a negative impact on their livelihood.

Since offshore wind farms are off limits for safety reasons, they could lead to a loss of fishing grounds, they worry.

To address this concern, the Korea Electric Power Research Institute, the research body of Kepco, has designed aquaculture modules to be installed at wind farms.

“The size of the aquaculture module is 2 hectares per megawatt. One module costs 720 million won and is expected to generate 200 million won of profits every year once installed,” a Kepri official said.

For the demo project, Kepri will inject 5 billion won and test the module’s economic feasibility over the next two years. If proven successful, the Korea Offshore Wind Power — a special purpose company established by Kepco – would purchase this technology.

“The module, to be installed 10 kilometers off the coast, will consist of 10 rows of a 200-meter-long line. These longlines float on the surface by buoys and are fixed by anchors. Hanging on these longlines, seaweeds are cultivated. Underneath seaweeds, seashells are grown inside cages, which are connected to longlines. The module provides a shade, attracting diverse species and enriching nearby fishing grounds,” the Kepri official said.

In theory, if such modules are installed at full capacity within the planned 8.2-gigawatt Sinan offshore wind farm, it will yield additional profits worth 1.64 trillion won every year.

Is it worth it?

The cost of installing the module, estimated by Kepri at 720 million won per megawatt, means a 12 percent hike in the overall cost of the entire Sinan wind farm project.

Private wind developers would have to commit to that increase in cost, with no guarantee of return, as the modules will be leased for free to fisheries, who will operate them and take most of the profits.

Besides appeasing local fishermen, which practical advantages does that bring to developers?

Kepri said there will be economic and non-economic benefits from making wind farms a platform for aquaculture and fishery.

By working together with fisheries, developers can cut operation and maintenance costs, which make up 25–30 percent of the total lifecycle costs for offshore wind farms, according to multiple researches. This is almost as much as the cost of the wind turbines and about as much as the costs of their construction and installation.

“Fishing boats have to make frequent visits to the modules to look after them. Developers can share the ride and cut costs in O&M and run more flexible operations. When waves are more than 1.5 meters high, developers can in turn use their big ships and have fishermen share the ride,” the Kepri official said.

Flexible operations are pivotal for developers, as nearly 50 percent of maintenance labour cost charged are wasted on waiting for the transport opportunities, acceptable weather conditions and so on.

Logistic waiting times can result in substantial revenue losses, whereas timely spare-parts supply or sufficient repair capacity of technicians can shorten the logistic delay times. A recent study suggests that a cost reduction of 10 percent is feasible, if the offshore wind and aquaculture sectors are combined in order to coordinate and share O&M together.

Local governments will review adjusting fees charged on developers for the occupation and usage of shared waters to a ‘reasonable level,’ if they allow passage of ships and fishing operations.

For fisheries, not to mention 200 million won of annual revenue per megawatt, the aquaculture modules within wind farms can offer airtight security.

“One of the issues of fish farms is that they are often stolen or lost. However, wind farms are monitored 24/7 so chances of theft are significantly low. Also, the fish farms are less likely to be hit by ships and get carried away,” the Kepri official said.

Also, the long distance from the shores guarantees quality seafood.

“Fish farms near the cost are affected by contaminated water released from rivers. In contrast, offshore wind farms can harvest high quality seafood with almost no contamination as big waves and strong winds keep circulating seawater,” the Kepri official said,

Oysters, for example, when harvested near coast, are susceptible to viruses that could cause norovirus after being eaten.

Korea Power Corp. plans to develop and commercialize a premium brand with seafood harvested from the fish farms.