During its first two years of operation, the wind farm achieved an average capacity factor of 54%. That compares to an offshore wind average in the U.K. of around 40%. The capacity factor is the ratio of actual energy output over a given period of time, to the maximum possible output.  A higher capacity factor means lower intermittency and higher value.

“In Equinor we are constantly striving to improve the performance of our assets, whilst ensuring we extract learnings to support future projects. The turbines on Hywind Scotland are covered in sensors, to extract as much data from the wind farm as possible. We’re monitoring everything from ballast, mooring, structural strains and the more regular wind turbine sensor data, looking at how best to optimise this innovative technology as we prepare to develop at scale. We’re sharing parts of this data across industry to help the advancement of the technology globally and more widely than just our own operations,” says Sonja Chirico Indrebø, plant manager for Hywind Scotland and Dudgeon, the bottom-fixed wind farm off the coast of North Norfolk, who also can show to strong results.

As the first project of its kind, the Hywind Scotland wind farm has provided valuable data and results that will help drive the whole industry forward.

“It’s great to see the results Hywind Scotland and the floating technology keeps delivering. The potential for floating offshore wind is huge. With access to deeper waters and therefore higher and more consistent wind speeds, floating offshore is not only an efficient way to generate electricity from wind, this exciting technology can also provide jobs and value creation for the countries supportive of floating. In the UK alone, we are talking at least 17000 jobs and £33bn GVA by 2050. We believe Scotland has the potential to build a globally competitive offshore wind industry, including a real chance to enhance the development of floating offshore wind,” says Sebastian Bringsværd, head of floating wind development at Equinor.

As a global major in offshore wind with decades of experience in developing offshore energy – oil and gas, Equinor is uniquely placed to drive forward global deployment of floating offshore wind.

In 2009, Equinor installed the first ever floating offshore wind turbine, and Hywind Scotland followed in 2017 as the world’s first commercial floating offshore wind farm. It is now developing an even bigger project, Hywind Tampen, situated off the coast of Norway. This project, currently in construction, is on schedule to become the world’s largest floating wind farm as well as the first project ever to use wind energy to decarbonise offshore oil and gas production.

A recent report from ORE Catapult showed potential pathways for the growth and cost reduction for floating offshore wind. 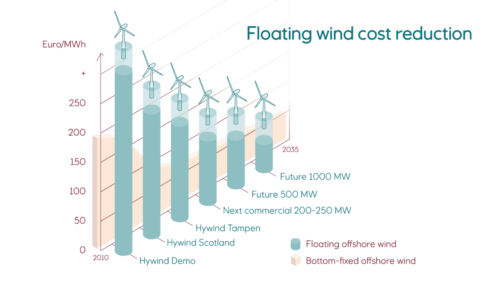 “The global energy industry has been pleasantly surprised by the rapid decline in the cost to deploy fixed bottom offshore wind. We’ve been working on floating offshore wind for more than ten years and we see that significant cost reductions can be achieved through scale and experience, paving the way for floating to become fully commercialised,” says Bringsværd.