GBM Works from the Netherlands has developed a new method to reduce the noise pollution caused by driving foundation piles for wind turbines into the seabed. The seabed is, as it were, fluidised with water jets that spray water into the seabed, reducing the friction on the inside of the pile. With the aid of the Jet-gun and due to vibrations the monopile sinks into the seabed under its own weight – faster and with significantly less noise. To test the system, vibrations and deformations of the monopiles were measured using strain gauges, supplied by HBK. The results from this trial, at the Maasvlakte site, provided more information than first expected.

Ben Arntz, founder and director of GBM Works, describes the problem: “Driving foundation piles for wind turbines into the seabed causes vibrations, pressure waves and – in particular – also a great deal of noise. When a steel foundation pile with a diameter of eight metres is driven, the noise production can reach a level up to 180 decibels. The vibrations, the pressure waves and the loud noise have a negative effect on underwater life. Not only are animals startled by the vibrations and the seabed disturbance, but communication between marine mammals – such as dolphins and whales – is disrupted. Regulations have therefore been adopted to reduce the noise production in piledriving activities at sea. In German waters, a limit of 160 decibels at a distance of 750 metres from piledriving activities is currently in effect. In the Netherlands the rules are somewhat more flexible, with a limit of 160 – 170 decibels, but the expectation is that international guidelines will become stricter in the coming years. GBM Works has set the goal that the new method for installing the foundation for wind turbines in the seabed, should be an established alternative for the traditional pile hammer in combination with a sound mitigation system in 2025.” 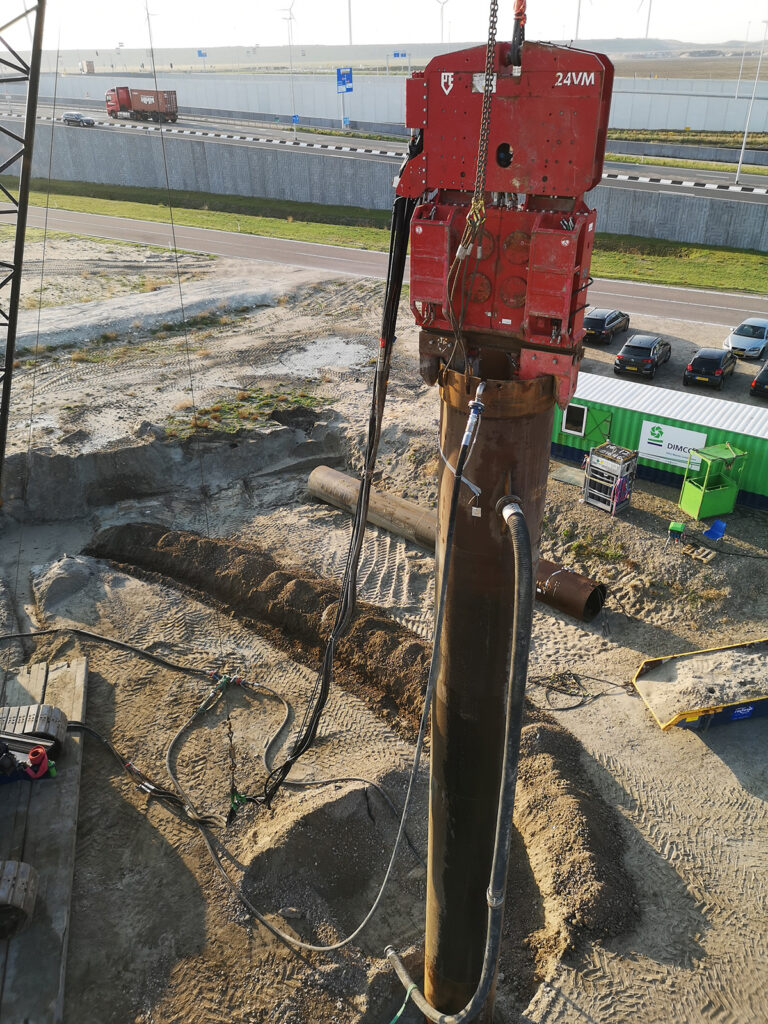 The method of GBM Works for installing the pile silently is actually quite straightforward. On the inside of the pile, dozens of water jets spray seawater into the seabed. As a result, the seabed takes on properties comparable to those of quicksand. The seabed becomes ‘fluid’, decreasing the resistance of the seabed so that the foundation pile sinks into the seabed faster. The second part of the solution is a vibratory hammer that replaces the hydraulic piledriving rig. In a traditional piledriving rig, a steel pile hammer strikes a foundation, made from the same material, which produces a great deal of noise. The vibratory hammer consists of rotating disks mounted on top of the monopile. These cause the monopile to vibrate so that it sinks into the fluidised seabed layer.”

The jet gun system works for sand, clay or a multilayer seabed. For optimal functioning of the water jet system, GBM Works has developed a simulation model that calculates the ideal combination of water pressure, flow and jet direction for a sand or clay substrate. 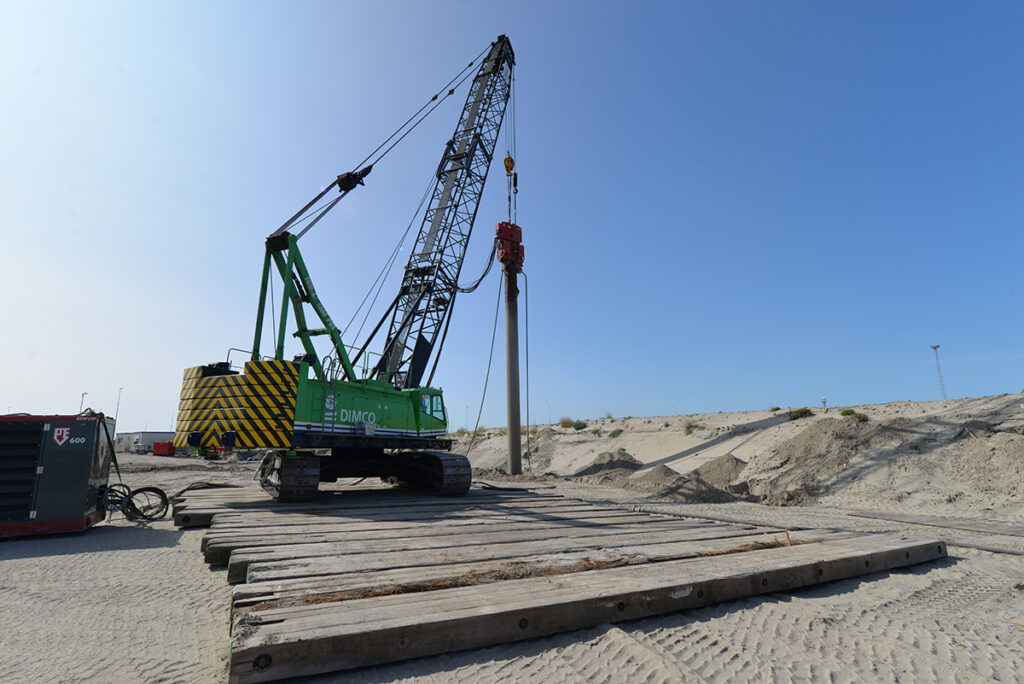 Test series in the Maasvlakte

To assess the operation of the system and demonstrate the added value of the new method in practice, a series of tests was conducted at the Maasvlakte in September 2020. “The aim was, among other things, to collect information on the vibrations that arise, the water pressure that is needed, the behaviour of the soil and – of course – the effect on noise damping. The tests were financially supported by the Netherlands Enterprise Agency (RVO) in the framework of the ‘Stimulation of sustainable energy production and climate transition’ programme (SDE++),” explains Wouter Verschueren, data & model engineer at GBM Works. “We tested four setups; two with the jet gun system and the vibratory hammer on monopiles with a diameter of 70 and 120 centimetres, and two tests with the vibratory hammer alone on the same foundation piles. In all, 62 test installations were executed in an area of about 5000 square metres over a period of three weeks. The area was divided into plots, for which we had mapped out the soil structure and composition in advance, to also enable us to map the effect of the soil composition on the results.” 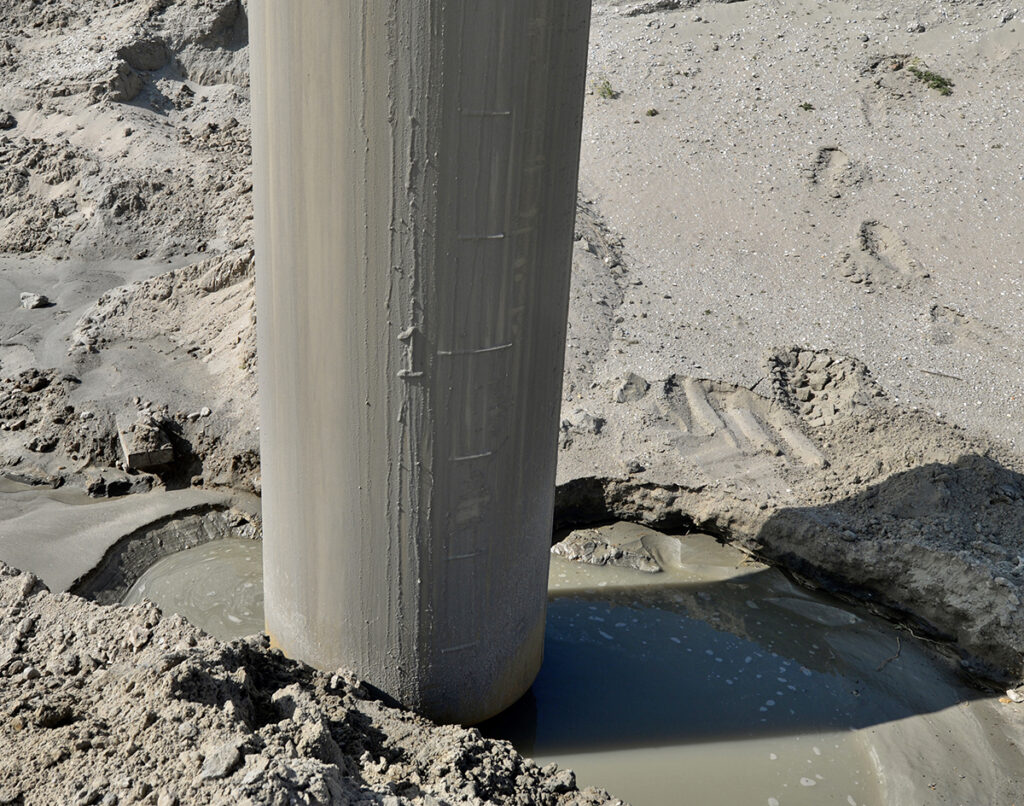 GBM Works chose to use strain gauges from HBK, as it had read about other test and research projects that HBK had worked on involving the foundation and other components of wind turbines. HBK advised GBM Works on using the right strain gauges and attached them to the monopiles.

“The strain in the monopiles was measured with the strain gauges. When you exert pressure on steel monopiles, deformation occurs, and vibrations arise that cause noise. The pattern of the deformation and the vibrations are very different in the two methods. Thanks to the strain gauges, we also got information on fatigue in the foundation piles. Traditional piledriving can cause damage and have a negative effect on the lifespan of monopiles. They are therefore often over dimensioned by engineers. With the new method that’s not necessary and you cut costs.” 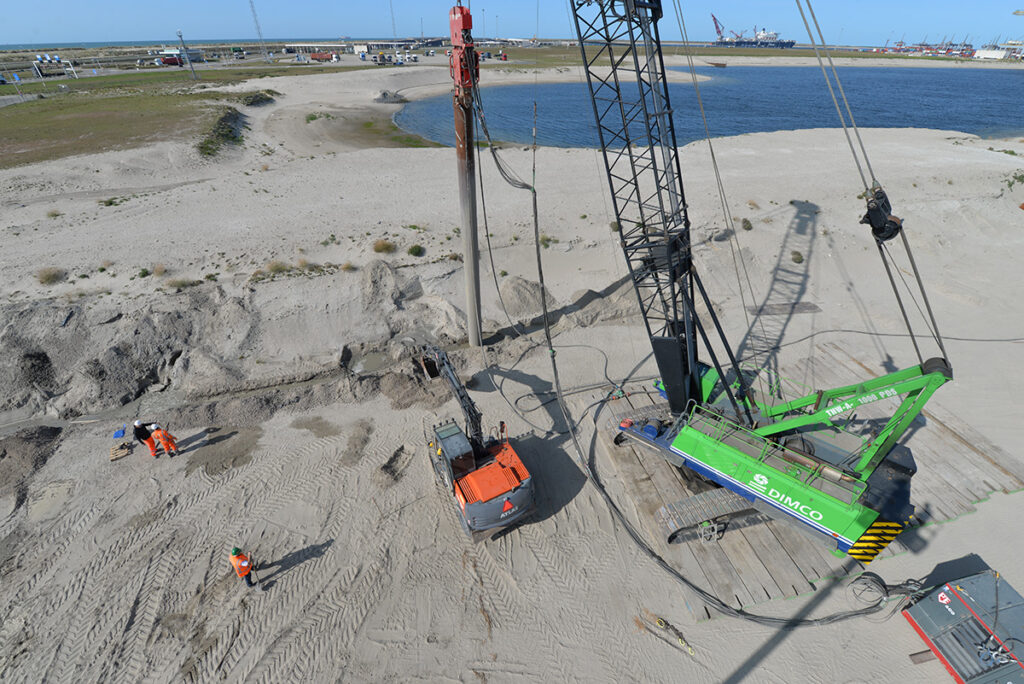 Noise reduction of 90 to 95 percent

“Most of the data now has been analysed,” Verschueren explains. “The results are far above expectations. We saw, for example, that the foundation piles with the vibratory hammer alone penetrated the ground no farther than three or four metres because the soil resistance became too high. With the jet gun and the vibratory hammer, the piles easily went to a depth of 10 metres, while the speed at constant force quadrupled. The vibrations were reduced by 25 to 75% when the jet gun was used. Moreover, the force of the vibrations increases as the installation speed decreases.

In a subsequent test cycle underwater the noise production of the solution with the vibratory hammer and the jet gun will be compared to that of a traditional pile hammer. A piledriving rig in combination with a sound mitigation system is currently used. These are complex systems that operate with an underwater shield around the foundation pile to damp the vibrations and noise. GBM Works expects a noise reduction of 90 to 95 percent thanks to the new system.” 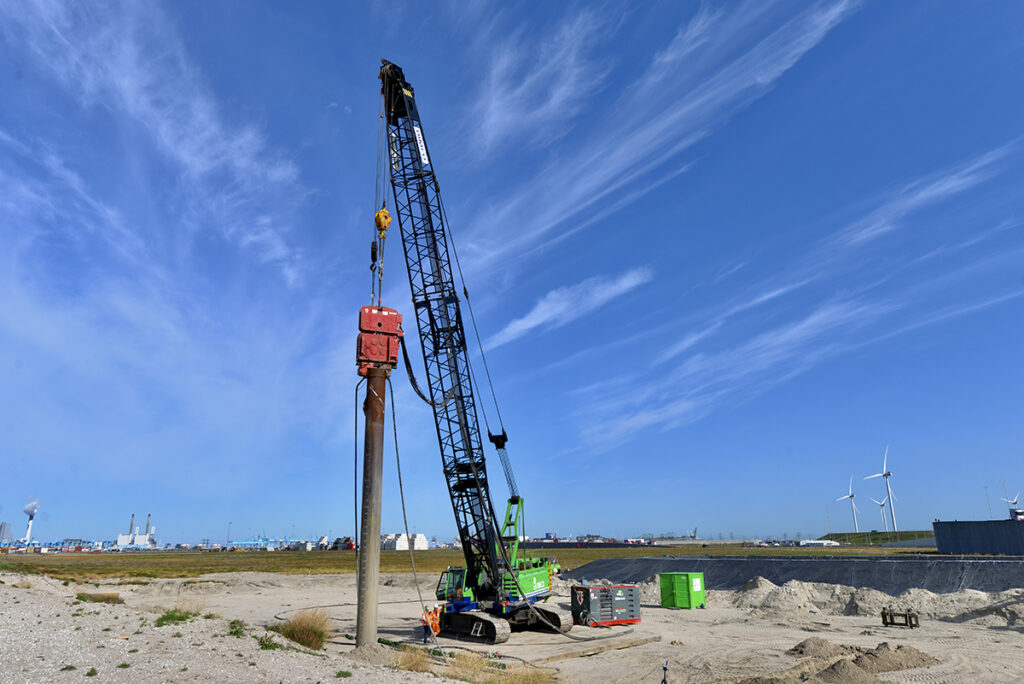 Aside from the noise reduction when the system is used and the acceleration of the process of installing the foundation, Arntz also points out the logistics advantages for contractors: “The traditional piledriving rig with sound mitigation system is a complex installation. The contractor must rent all the equipment and transport it to the location. With our system an underwater shield is not needed, so that the logistics process is simplified and the installation time reduced. We cannot yet make any firm statements about the possible cost savings of our method, but if you assume a cost savings of just ten percent on the piledriving process alone, then the savings for an entire offshore wind park can reach millions of euros.”