Between 18-36 kilometers off the Dutch coast, Vattenfall’s offshore wind farm Hollandse Kust Zuid (HKZ), meaning Dutch Coast South, will arise. In June 2021 the construction of this wind farm, which will become world’s largest, will start. With 140 11MW wind turbines, the wind farm will produce enough fossil free electricity to cover the consumption of over two million households. This enormous project, Vattenfall is trying to realise in the most environmentally friendly way. 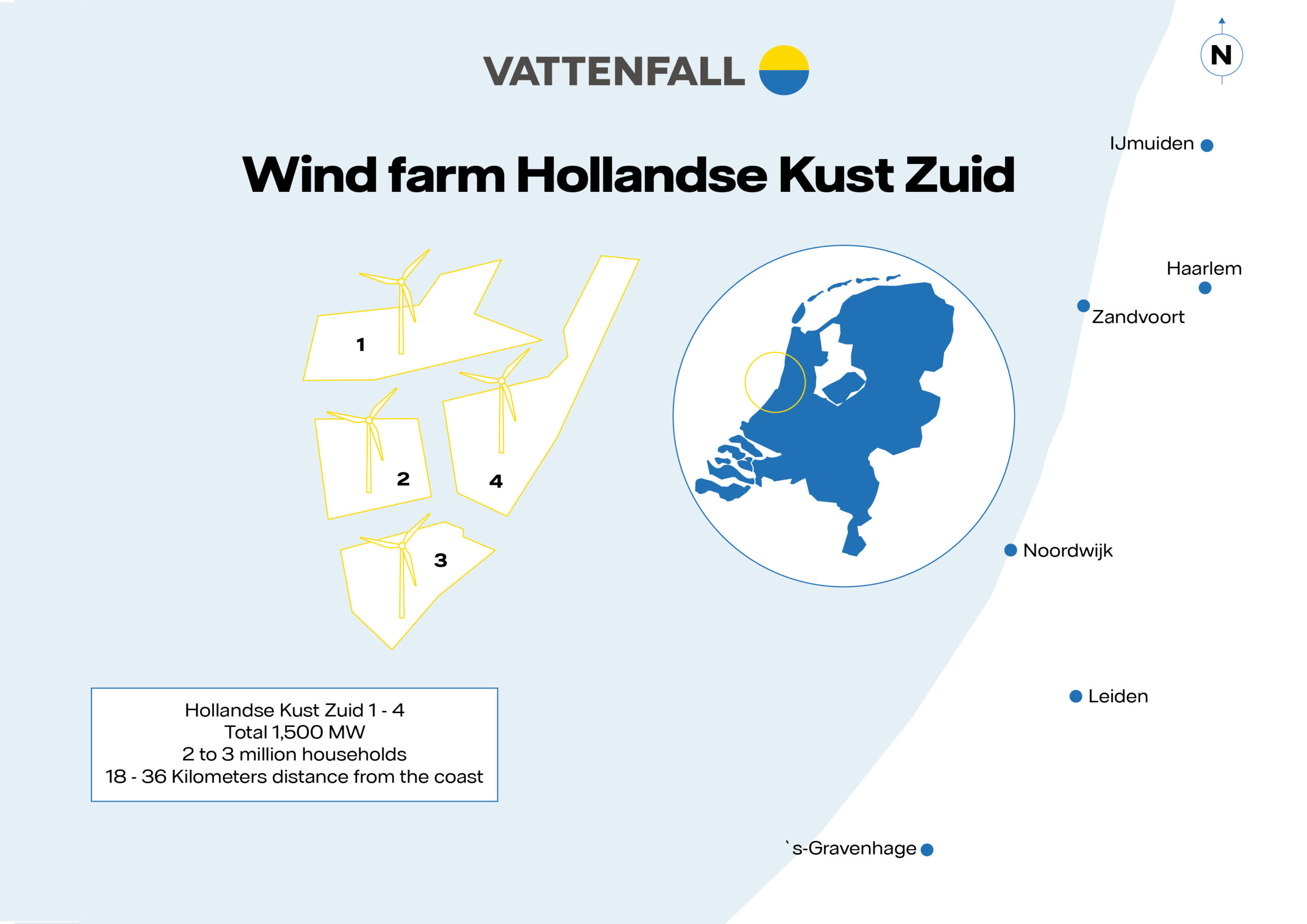 Monopile cover
One of the aspects Vattenfall wishes to improve in this project, is the sustainability of the monopile (MP) cover. An MP cover is a device which protects the inside of the monopile, once it has been installed in the seabed, and specifically the airtight platform which is situated 1.2m underneath the top, inside the monopile. The monopiles in this project will not be equipped with transition pieces but will make a direct connection with the turbine tower. Every monopile will therefore be equipped with a flange through which it will be bolted together with the turbine tower. All secondary steel such as ladders and platforms will be hung on the monopile. Offshore workers will use the airtight platform for a.o. the pull in of inter array cables. The MP cover which will be placed on top of the monopile and will protect them during their job.

Safe and healthy working place inside the monopile
Without a cover, the work platform inside the monopile can become wet and slippery from rain or splash water and soiled by bird faeces. It is essential for Vattenfall to ensure a safe and healthy working environment for all offshore workers. Therefore, a cover was an absolute requirement. As to functional specifications, the cover needed to be water- and dirt tight to prevent any chance of mould growth and condensation on the inside of the monopile above the airtight platform. With regards to environmental aspects, the cover had to be reusable or easy to recycle to minimize the environmental footprint.

Covers up to today
Up to now three types of covers have been used on monopiles by the offshore industry. Tent covers, steel- and aluminum covers. All three have disadvantages. Tent covers are not suitable in wintertime. At high wind speeds there is a risk that they are blown away, contaminate the sea and leave the monopile unprotected. The steel and aluminum covers are quite expensive and the recycling process of the cover requires a lot of energy again with aluminium being the top energy consumer. As monopiles often differ in diameter per project, none of the steel or aluminum MP covers have been reused on a new project up to today.

Dutch team designs ingenious birthday cake
With Vattenfall’s sustainable mission in mind, they asked Sif – who was granted the fabrication of the monopiles – to come up with a smart and environmentally friendly solution for the covers. Quickly the ball started rolling and different Dutch parties joined forces.

The construction consists of different fiber reinforced polyester panels and looks a little bit like pieces in a pie. ‘It was not the first material we thought of’, Christian Larsen, project engineer for Vattenfall at HKZ, admits. ‘But we wanted a new and sustainable concept and gave our subcontractors the freedom to come up with a new concept, both in terms of construction as well as in material choice.’

The composite panels are connected to each other with metal strips and bolted together. Hatches for entering the monopile are also included the cover design. 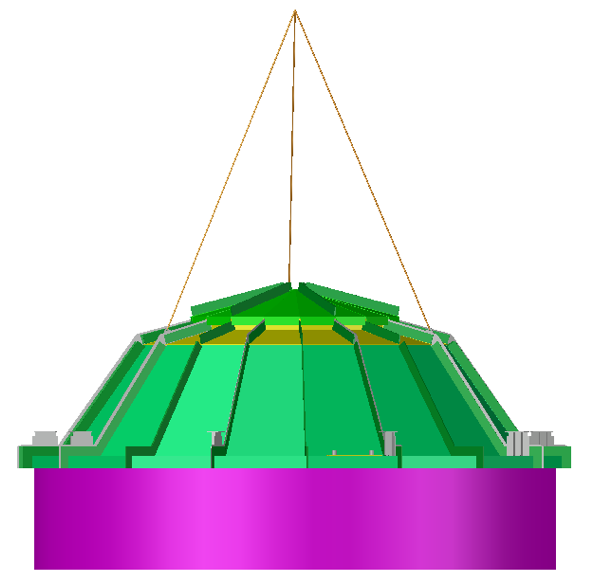 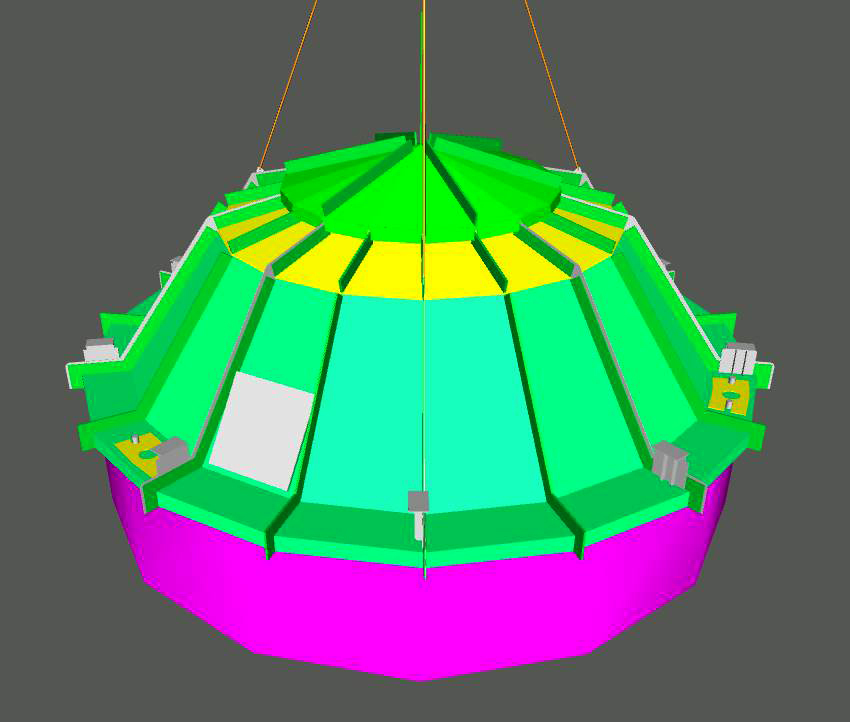 Nine Strongpoints with a working load limit of 0.5 tonnes are included at the underside of the MP cover that allow the cable contractor to fixate its cables. The strongpoints are located 2m from the MP flange and equally distributed across the entire circumference. The strong points can be loaded to a maximum of six adjacent strongpoints with a maximum of 500 kg each. The cover will have three lifting points and the possibility to install a tripod for cable pull in works. Furthermore, the design of the MP cover will be optimised in such a way that it avoids opportunities for bird nesting on the MP cover.

Reusable MP cover construction
The idea behind the different panels is that you can reuse the top panels of the cover for every diameter of offshore monopile which is currently on the market. Top diameters of monopiles typically vary between 6 and 8m and the concept perfectly matches for those diameters. The MP covers can be tailor made by using longer or shorter parts on the slope in order to adjust to the exact diameter of the monopile in a next project. Also the number of hatches can be tailor made for each project. It is just a matter of exchanging panels. The panels can easily be dismounted and transported by sea container all over the world for a next project. Moreover the panels have a lifetime of 10 years. At the end of their life, they can be ground to granulate and used f.e. as filling material in concrete. 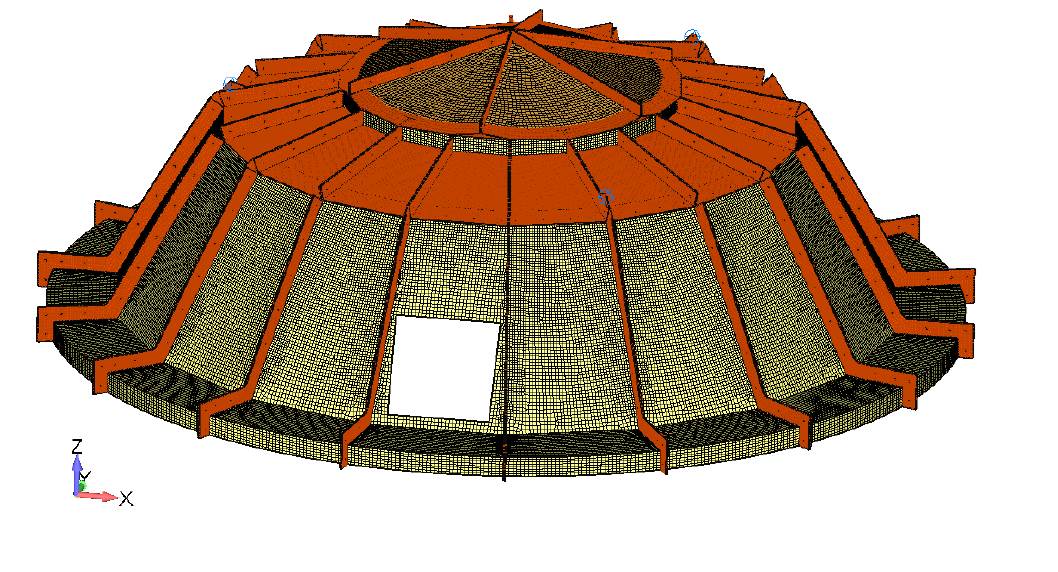 Subsidy for innovative composite cover
Spokesman Wim Joosten of the Kansen voor West (KVW) programme explains the reason of their involvement and grant for this project:

‘The KVW programme is a cooperation of the four Randstad provinces (Noord-Holland, Zuid-Holland, Utrecht and Flevoland) and the four major cities in this area, aiming to stimulate innovation and the creation of new jobs.’ ‘KVW is like a liaison party trying to strengthen the competitive power of the region by bringing parties and opportunities together and subsidise new innovations such as the development of this composite MP cover.’ ‘Offshore winds farms could become an interesting new market for the regional composite industry in the North Western part of the Netherlands and with a first innovative project we can show this to the offshore wind industry,’ Mr. Joosten concludes. Because of this potential, the province of North Holland itself, has given a substantial grant as well, on top of the KVW programme.

This regional aspect is also important to Vattenfall. ‘Even though Vattenfall is a European player operating in a highly competitive and globalized market, we are always open to opportunities to add local content to projects and create benefits for the local community’, Christian Larsen of Vattenfall adds. ‘As the complete HKZ offshore wind farm will be built without any governmental financial support, the subsidy for the MP cover enabled this innovative design. Without it, it would not have been possible’, Christian Larsen further clarifies.

The KVW programme receives its funds for the larger part from the European Regional Development Fund, in the Netherlands better known as Europees Fonds voor Regionale Ontwikkeling (EFRO).

Prototype
Enersea, Femto and Theuws developed the detailed design which led to a first prototype. At the Theuws yard in Wieringerwerf a functional inspection and water test was carried out with positive results mid June 2020. 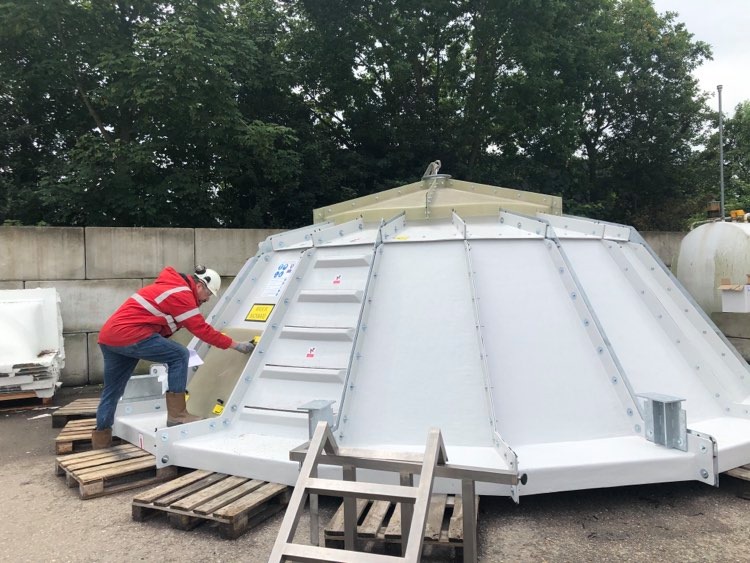 End June further tests took place at Sif’s terminal at Maasvlakte 2 in Rotterdam. This time the cover was mounted on a mock up monopile so the complete construction could be tested on functionality, load resistance, water tightness and several other aspects. Also here the test outcome was very promising. 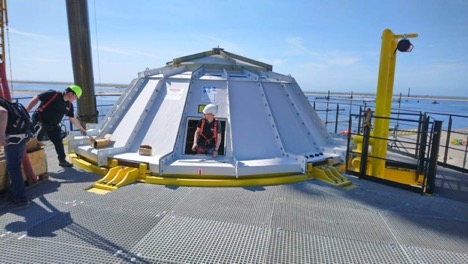 Picture at Sif terminal Maasvlakte 2 Rotterdam during mock up testing.

Vattenfall will start the construction of HKZ in June 2021. Less than a year to go to optimise this MP cover prototype, get into serial production and have the first 41 covers ready for installation. An exciting challenge all Dutch partners in this project are eager to tackle together with client Vattenfall.