There are currently six operational wind farms with a total capacity of 1,556 MW in the Belgian part of the North Sea: C-Power, Belwind, Northwind, Nobelwind, Rentel and Norther.

In 2019, these farms produced 4.6 terawatt hours of electricity, which represents about 6% of Belgium’s total electricity consumption, or the equivalent electricity consumption of approximately 1.3 million families. By the end of 2020, two new wind farms will be commissioned: Northwester II and Seamade. Together, the 8 farms will produce renewable energy for approximately 2.2 million families, which is nearly half of Belgian households.

In the 10 years of offshore wind energy production in Belgium, installed power has moved gradually from 30 MW in 2009 to 1,556 MW in 2019. Offshore wind energy has developed particularly rapidly in recent years, through technological developments and a reduction in production costs. In 2019 alone, installed power increased by 370 MW (44 new 8.4 MW wind turbines) to reach a total of 1,556 MW. This is a significant increase of 31% in one year.

During the second half of 2020, the Northwester II (219 MW) and Seamade (487 MW) wind farms, which are currently under construction, will begin to produce electricity. The commissioning of these new wind energy projects in the Belgian part of the North Sea will allow to reach a total installed capacity of 2,262 MW. This is comparable to the combined capacity of Doel 3 (1,006 MW) and Doel 4 (1,039 MW). This 2,262 MW capacity will produce an average of 8 terawatt hours per year, which corresponds to the electricity consumption of about 2,200,000 households, or about half of the residential electricity consumption in Belgium. 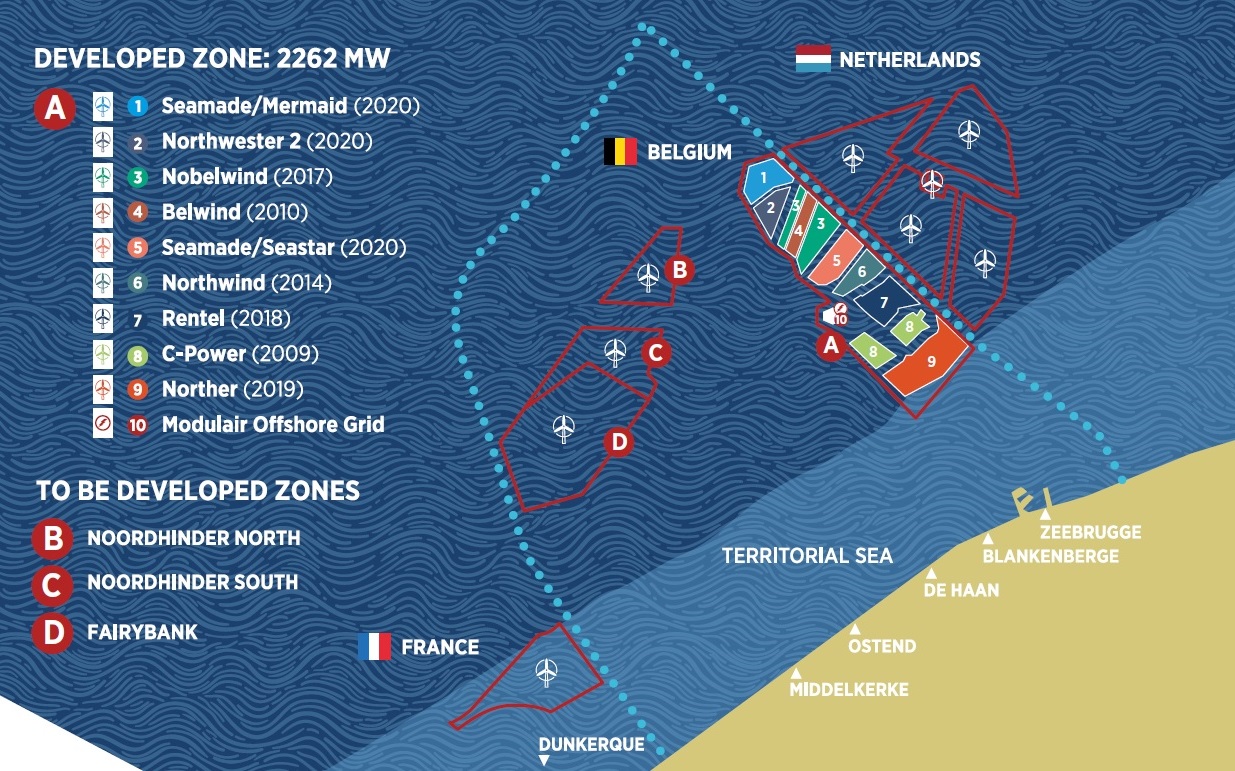 Offshore wind turbines produce electricity over 95% of the time: they turn from a light breeze (2 Beaufort) to a violent storm (11 Beaufort). Offshore wind energy is therefore a cornerstone of the sustainable energy transition in Belgium.

The new areas, located further west in the Marine spatial planning 2020-2026, will allow the development of approximately 2,000 MW of additional offshore wind capacity. If the developers are given a connection guarantee, the offshore wind industry could build new offshore power plants by 2024.

In the Federal Development Plan (FDP) 2020 – 2030, the grid operator plans to connect approximately 2,000 MW of new offshore wind capacity between 2026 and 2028. The federal government plans to publish the public tender for this new capacity at the end of 2023 at the earliest. It means that it is unlikely that new wind farms will be built in the Belgian North Sea within the next 5 years. The BOP regrets this standstill after 2020. While offshore wind energy can be developed quickly and cost-efficiently, the further deployment of this carbon-neutral production method is delayed by the fact that the Belgian electricity grid is not ready for new offshore wind capacity.