The Bloomberg New Energy Finance 2018 report peers into the future in an attempt to predict what changes will take place in world energy markets between now and 2050. For renewable energy advocates, there is much good news. Prices will continue to fall dramatically, propelling renewables to a 50% market share by 2050. 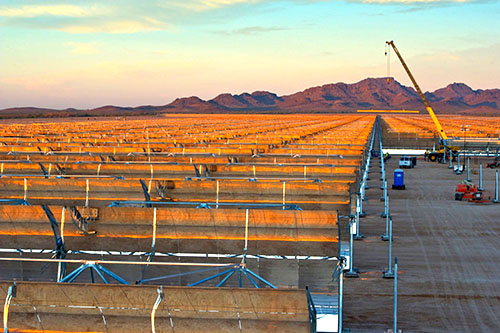 Along the way, the energy market will be significantly altered as consumers learn to adjust their need for electricity to coincide with times when renewable energy is abundant. That is a substantial change from today, when electricity generators strive to match available supply to consumer demand.

“We claim solar and wind have already won the race for cheap, bulk electricity — it just hasn’t finished playing out yet,” Sebastian Henbest writes. He heads the BNEF team for Europe, the Middle East, and Africa. This year’s research identifies two tipping points that support that conclusion.

“The first is when the cost of new wind and PV crosses the cost of new-build coal and gas. The headline here is that, whether we’re talking about coal-fired power in China, or combined-cycle gas turbines spinning in the U.S., well situated and equipped wind farms and solar parks are already as cheap as, or cheaper than, fossil fuel alternatives, almost everywhere. In many places, a wedge opens up as wind and solar costs continue to fall, while fuel prices, weaker-than-expected demand growth and behind-the-meter PV keeps new large thermal plant underutilized.”

“The second tipping point is when it becomes cheaper to source electricity from new wind and solar than it is to get it from fuelling and operating existing coal or gas plants. This takes longer, but is likely to start happening in the mid to late 2020s. What this means is that by 2030 we could see new wind and solar being built without subsidy to undercut the commissioned thermal plants, eroding the latter’s run-hours and revenues. “We conclude that with such steep learning curves, it’s a matter of when and how, not if, wind and solar disrupt electricity systems everywhere.”

The key to renewables is being able to store the electricity generated so it can be utilized during the times when solar panels and wind turbines are not providing enough to meet demand. Falling prices for lithium ion batteries will help put that last piece of the renewable energy revolution in place.

Henbest: “Today we can identify 131 GWh of lithium ion battery manufacturing capacity worldwide. The bulk of that is in Asia, and almost 60% is in China. By 2021, we expect that GWh number to more than triple, with China controlling around 73%. It is clear that China is positioning itself to dominate the global battery market just as it cornered the market for PV technology. Following the experience curve, we expect batteries to fall another 54% to $96/kWh in 2025, and 67% to $70/kWh by 2030. However there will probably be some bumps along the way – for instance, lithium and cobalt prices have tripled in the past 18 months and are set to slow down cost declines in the near term.”

Henbest and his team see more open cycle gas-fired peaker plants becoming part of the energy mix with ‘730 GW of peakers added worldwide between 2025 and 2050’. The losers will be the combined cycle gas turbine facilities that provide baseload power. As renewables and battery storage increasingly serve the need for baseload power, those CCGT plants will become too expensive to operate.

“All this points to the fact that gas-fired power is likely to be very valuable in the future electricity system as a flexible complement to wind and solar. And while this might be a good news story for equipment providers and the owners of gas power plants, it’s a less rosy picture for gas extractors and sellers, with fuel burn up just 14% to 2050 as electricity demand rises 57%.”

More electric cars and more air conditioning
BNEF sees the number of electric cars climbing to 60 million vehicles by 2040. It also expects the demand for air conditioning to grow significantly in emerging markets like southeast Asia, India, and South America. Electricity for charging electric cars will grow to 9% of worldwide demand but will be much higher in some countries. For instance, in Germany, it thinks electric car charging could consume up to 25% of available supply by 2050.

Typically, electric car charging takes place at night while people are home, but BNEF sees a major shift ahead in how consumers use electricity. It expects both commercial users of air conditioning and most EV drivers to shift their usage to times of the day when power from solar panels is abundant, further lessening the need for baseload power during the daytime.

“We’re already seeing special time-of-use tariffs emerge for EV owners in the U.S. and Europe, and we expect this trend to continue. The relative predictability and super-low marginal cost of electricity from PV suggests that much of this dynamic EV demand might flow toward the middle of the day. More generally, we think that growing flexibility in demand will fundamentally change the gross load shape. No longer will supply have to dispatch and ramp to meet changes in demand, but demand itself will shift to meet cheap renewables generation, helping wind and solar to achieve higher shares of the electricity mix. By 2050, we’re painting a picture of an electricity system utterly reshaped around cheap wind, solar and batteries. These technologies provide bulk electricity and are supported by thermal plants that run at low overall capacity factors, but can be dispatched when needed.”

Coal is biggest loser
Coal accounts for 37% of global energy production today. BNEF sees that falling to just 11% by 2050. It will peak in China by 2025 as the Chinese continue their quest to replace coal-fired plants in order to clean up the skies above. The peak in India is projected for 2033. In the US and Europe, renewables are already shouldering coal aside thanks to the cost advantage.

“In short, coal loses the market for bulk electricity to cheaper renewables, and the market for round-the-clock availability to more flexible gas, which better complements variable wind and solar.”

Renewables are not enough
All that good news and rosy projections notwithstanding, BNEF admits carbon emissions are not likely to fall far enough fast enough to meet the goal of limiting a rise in average global temperatures to less than 2º Celsius.

“The demise of coal and growth of renewables lowers the carbon intensity of electricity generation all over the world. Power sector emissions peak in 2027, the same year as coal-fired electricity generation, before falling at 2% per year to 2050. However none of this happens fast enough, and the power sector remains on track to outstrip a two-degree emissions trajectory by some margin. Even in the unlikely event the world agreed to a coal moratorium and shuttered all plants by 2035, the additional gas needed to ensure system security would still produce too many emissions.”

What is needed, BNEF says is “the next phase of low carbon technology that can offer a zero emissions substitute for gas to balance the system and bridge the seasonality gap.” Unfortunately, BNEF’s crystal ball contains no clues as to what that low carbon technology might be. Keep following CleanTechnica as we continue following developments that may suggest an answer to that question.