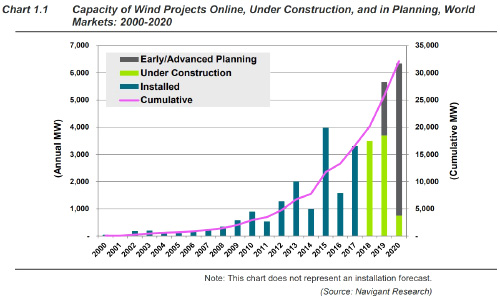 Navigant Research has published new figures which show a total of 3.3 gigawatts (GW) of new offshore wind energy capacity was installed in 2017, bringing the cumulative capacity up to almost 17 GW, with another 7.9 GW in the pipeline.

Published on Wednesday, Navigant Research released its latest report, Offshore Wind Market and Project Assessment 2017, which analyzes the offshore wind energy market around the globe, and found that 3.3 GW worth of new wind energy capacity was installed in 2017.

Navigant makes its money by selling its analysis, and the full breakdown of the analysis is not always easily available, so this figure is an interesting one when compared with figures published by the European offshore wind industry trade group WindEurope on Tuesday, which boasted Europe’s offshore wind industry installed 3.1 GW. If both reports are correct, then Europe accounted for 94% of all offshore wind capacity additions in 2017.

These are not necessarily surprising figures, or even figures which should be taken with a grain of salt, as Europe has been the world’s leading offshore wind energy center for years now. What is interesting is seeing how 2017 has only solidified Europe’s position and highlights the current lack of growth elsewhere — though Asia and the United States are both slowly making their way into the arena.

Globally, Navigant Research says that there is 18.7 GW worth of offshore wind capacity in advanced planning stages, though not all of these projects are guaranteed to make it through to construction.

Looking forward, Navigant Research expects the global offshore wind energy market to install over 24 GW of new capacity at a growth rate of 11.1% over the next five years, with a cumulative capacity expected to surpass 40.6 GW by the end of 2022.

“While the onshore wind market is larger in terms of total megawatt plant capacity added annually, offshore wind is growing more quickly,” said Jesse Broehl, senior research analyst at Navigant Research. “It is forecast to grow at an 11.1 percent compound annual growth rate between 2017 and 2022, compared to single-digit growth rates for onshore wind.”