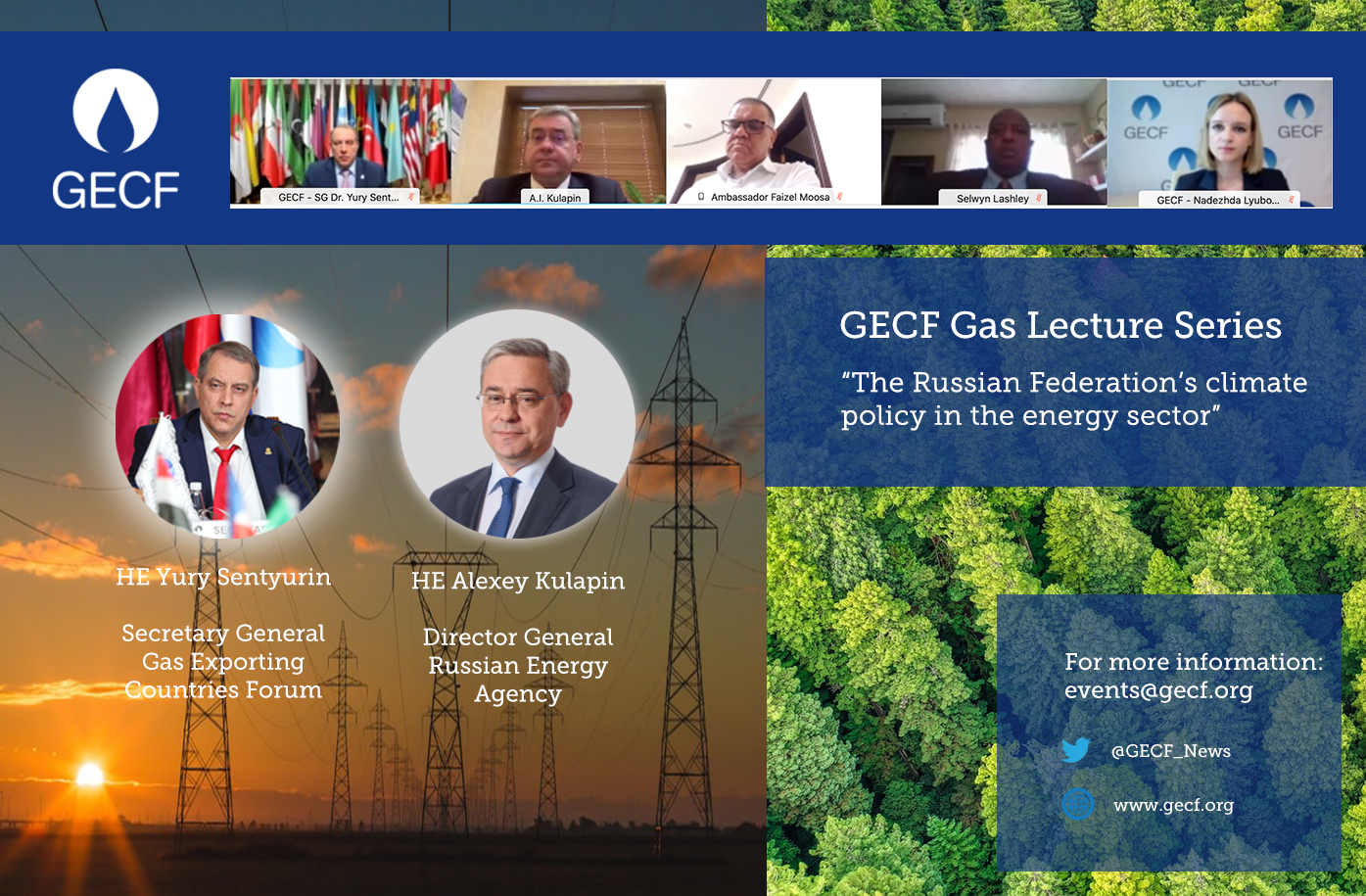 Speaking at the 51st edition of the GECF Gas Lecture Series, entitled ‘The Russian Federation’s climate policy in the energy sector’, Alexey Kulapin, the Director General of the Russian Energy Agency, noted that Russia’s energy system is underpinned by the vision of a greener energy system on one hand and stability and security on the other.

“Russia’s energy policy is based on the need to strike a balance between solving climate problems and the need to further provide the economy and population with affordable energy resources,” explained Kulapin.

Calling access to affordable energy a fundamental right, in line with the UN Sustainable Development Goal No. 7, the GECF Secretary General commended the steps being taken by many of the Forum’s 19 Member Countries to achieve net-zero emissions.

“We heard a lot about Russia today but our other Member Countries are also leading the way in transforming their business model. Qatar, for example, is playing a greater role in the area of environmental, social, and governance (ESG) investments. Yet another member, Egypt, has blanket banned issuing of all new vehicle licences unless they run on the cleaner natural gas,” said HE Yury Sentyurin.

“Being a world-leading coalition representing more than 70% of an important natural resource (natural gas) brings with it a remarkable weight. We strive to achieve actions that put nature, people, and planet at the heart of value creation.”

Echoing these sentiments Kulapin noted that Russia, as one of the largest players in the international energy markets, fully supports the efforts of the world community to combat climate chance. He highlighted that in November 2020, the Russian President signed a decree to reduce the country’s greenhouse gas emissions (GHGs) as part of Russia’s implementation of the Paris Agreement.

However, according to him, until new sources of energy are able to provide uninterrupted energy supply, natural gas, including liquefied natural gas (LNG), will remain the cleanest energy resource and will even serve as a transitional fuel to a low-carbon economy. In this regards, projects such as the Power of Siberia 1 and 2, Turkish Stream, and Nord Stream 2 were highlighted. Currently, Russia enjoys a total LNG production of nearly 30 million tonnes per annum (mtpa), which is set to increase by 2 to 2.5 times to 80-140 million by 2035, in line with the newly-adopted ‘Energy Strategy 2035’. Work is also underway to increase the use of gas in the transport sector. In the period 2018-20, a total of 250 refuelling stations offering compressed natural gas came alive, an increase of  60% on previous capacity.

In the area of electricity, Kulapin asserted that Russian already has one of the cleanest electricity structures, as 80% of generation comes from nuclear, hydroelectric, steam gas, and thermal cogeneration sources. This compares to United States (65%), Germany (57%) and China (below 30%) in terms of low-emission energy sources for electricity generation, he said.

“Despite this, the country has a deliberate policy aimed at improving the efficiency of energy production and consumption, which allows to reduce greenhouse gas emissions in the energy sector.”

On hydrogen, the official noted his optimism on its potential in various fields, as the ‘Energy Strategy 2035’ envisions competitively priced hydrogen exports of up to 7 mtpa by 2035 and 33 mtpa by 2050.

“Russia can provide competitive hydrogen both in the European and Asia-Pacific markets. The cost of producing low-carbon hydrogen from natural gas in Russia is at $1-1.5/kg, whilst the cost of producing hydrogen electrolysis is $3.5-4/kg. We are ready for mutually-beneficial cooperation with partners overseas,” he said.

“In particular, work is underway in areas such as the introduction of new renewable energy generating facilities, development of renewable energy technology base, ability to remotely control operations, and building a highly skilled human resources capacity.”

Last year, the country improved the procedure of competitive selections of renewable energy and set new targets for localisation and export until 2035. Further, a draft federal law on the introduction of a mechanism for the formation, credit and circulation of certificates of origin of electric energy – carbon-free certificate – has been prepared and submitted to the government.

“An important challenge is to ensure international recognition of these mechanisms, in particular the recognition of carbon-intensive compensation for products with carbon-free certificates. The Russian Energy Agency is ready to engage with foreign partners on this,” he concluded.