The head of the La Gan offshore wind project, Maya Malik, a 3.5GW offshore wind farm being developed off the coast of Binh Thuan, Vietnam, has featured in a national television programme to support Earth Hour 2021. 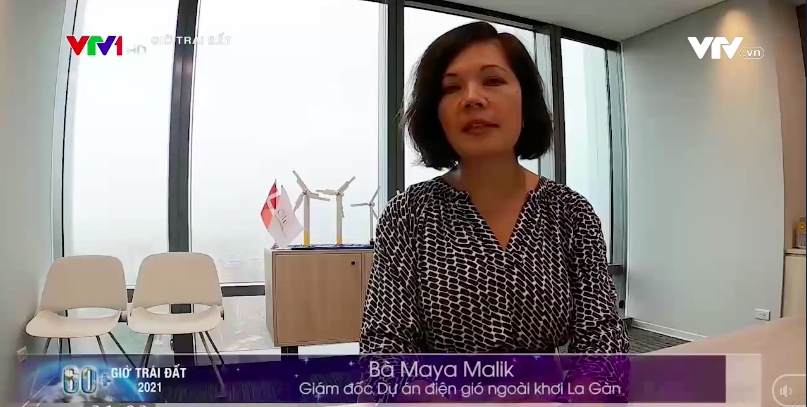 The statement came as part of the Earth Hour 2021 programme on VTV1 on March 27 – the day designated around the world in which individuals and businesses are encouraged to switch off all non-essential electric lights for one hour as a symbol of our commitment to the planet.

Last year’s Earth Hour inspired a huge following – in Vietnam the initiative specifically called for a change in three areas related to consumption behaviours – energy, plastic waste, and wildlife. All 63 provinces in the country took part, with 44 LED screens being erected for public advertising, and 100 electricity booths set up in Hanoi’s iconic Old Quarter, supported by Vietnam Electricity.

Earth Hour’s goals for 2021 include supporting the critical role of nature in a healthy future and promoting sustainable behaviours. The campaign targets to reach 2 million people on social media within Vietnam, and include the participation of over 30 media partners in the country.

With that, the La Gan project has committed to support the event and join forces with MoIT and MoNRE to help Earth Hour achieve even more this year.

Ms Malik said: “Vietnam is lucky to have some of the best renewal energy resources in the world, and in the latest draft of the National Power Development Plan, the Vietnamese government has sent a clear signal that it will keep supporting the growth of renewables. Copenhagen Infrastructure Partners, Asiapetro, and Novasia, in collaboration with the Embassy of Denmark, are strongly committed to building one of the first large scale offshore wind farms in the country”.

The 3.5GW La Gan project is expected to provide a range of social and economic benefits to Vietnam. According to a detailed economic impact study conducted by international experts BVG Associates, the 3.5GW La Gan project could generate over 45,000 full-time equivalent (FTE) jobs, where 1 FTE is 1 job for 1 year. In addition, the venture could contribute over $4.4 billion to the Vietnamese economy.

La Gan has obtained provincial approval for a survey license and pre-feasibility study, and is currently awaiting central government approval. According to Ms Malik, four major survey contracts worth $10 million USD have been finalised to carry out site investigations upon survey license approval, and several MoUs with Vietnamese-based companies have been inked for foundation supply and harbour services.