The Netherlands and Denmark have signed an agreement of intent in which they agree to have TenneT, Gasunie and Energinet carry out further research into a joint energy hub in the North Sea. 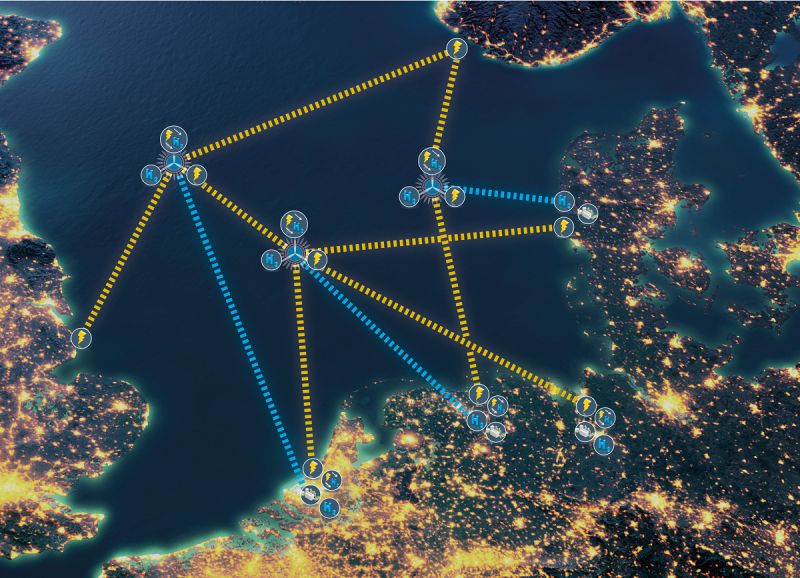 “Denmark is an important partner for the Netherlands when it comes to climate and energy. Both countries are ambitious in the field of CO2 reduction. Denmark and the Netherlands are neighbours in the North Sea and are connected both literally, via the Cobra cable for the transport of electricity, and figuratively, by the shared commitment and ambitions for wind energy at sea,” says Minister Wiebes (Economic Affairs and Climate). It is clear that the Netherlands could benefit from closer cooperation with Denmark.

Opportunities include increasing interconnection capacity for security of supply, possible synergy with our national plans for offshore infrastructure in the north of the Netherlands and possible hydrogen opportunities in the Groningen/Eemshaven region.

In June 2020, Minister Wiebes signed a Memorandum of Understanding (MoU) with Danish Minister JØrgensen of Climate, Energy and Utilities in which various energy policy themes were identified in which we would like to work closely together. An important theme is cooperation in the field of offshore energy hubs in the North Sea. Such ‘hubs’ are landing facilities in the sea (via an artificial sand island, a platform, or another physical form) for offshore wind farms, from which energy can be transported to different countries in the form of electrons or even, after electrolysis, in the form of (hydrogen) molecules.

Manon van Beek, CEO TenneT responds: “Energy will increasingly become a cross-border business and cooperation across the borders of organisations and countries is the key to a successful energy transition. In this context, we are already realising cross-border offshore projects and many more opportunities lie ahead. Offshore wind will undoubtedly become the new powerhouse of North-West Europe, a region that is perfectly connected via the North Sea. And it will only be in a European context that we can and will make optimum use of every electron generated at sea. Intensive cooperation between TSOs, governments and other bodies involved – across borders – must be the rule in order to ultimately achieve a European sustainable energy system.”

Ulco Vermeulen, Executive Board Gasunie: “Large-scale production of wind energy in the North Sea is the basis for making the entire energy system more sustainable. Intensive cooperation between gas and electricity companies from different countries around the North Sea is crucial to achieve a new sustainable energy system with as favourable a cost level as possible. This MoU is a useful step in the right direction. It is a compliment that both TenneT, Gasunie and Energinet have the confidence of the Dutch government to contribute to this as ‘knowledge leaders'”.

It has been agreed that additional analyses will be carried out by TenneT , Energinet and Gasunie on the joint development of an energy hub in the North Sea for connecting offshore wind farms. On the basis of these analyses, a decision must be taken by the Netherlands and Denmark before 2022 as to whether it is appropriate to continue this cooperation. Tennet, Energinet and Gasunie are already partners in the North Sea Wind Power Hub consortium. This consortium has been working for years on concept development and research into artificial islands at sea on which several large transformer substations can be built to connect offshore wind farms.