Neftegaz.ru reports on the resumption of pipe-laying for the Nord Stream-2 Project, almost exactly one year after it was brought to a halt by sanctions. 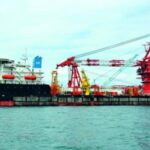 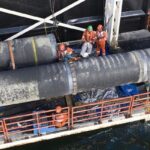 The Russian pipe-lay vessel Fortuna will lay a 2.6 km section of the gas pipeline in Germany’s EEZ in water depths less than 30 m. Further construction work on the offshore section will be announced later.

Reuters said in an article that the Fortuna arrived at the Nord Stream 2 site last Friday with work on the project set to resume. According to AIS data, there are also several procurement vessels near the site.

However, almost 158 ​​km of pipe-laying remains in deeper water. This work is likely to be carried out by the pipe-laying vessel Akademik Cherskiy, which recently underwent months of upgrading in order to be able to execute the work. The Akademik Cherskiy arrived at the site north of Germany and Poland already some time ago, but has since moved away and is located near Kaliningrad.