Today, businesses and government bodies in the Northern Netherlands presented their investment plan for hydrogen in their region to various Dutch MPs. 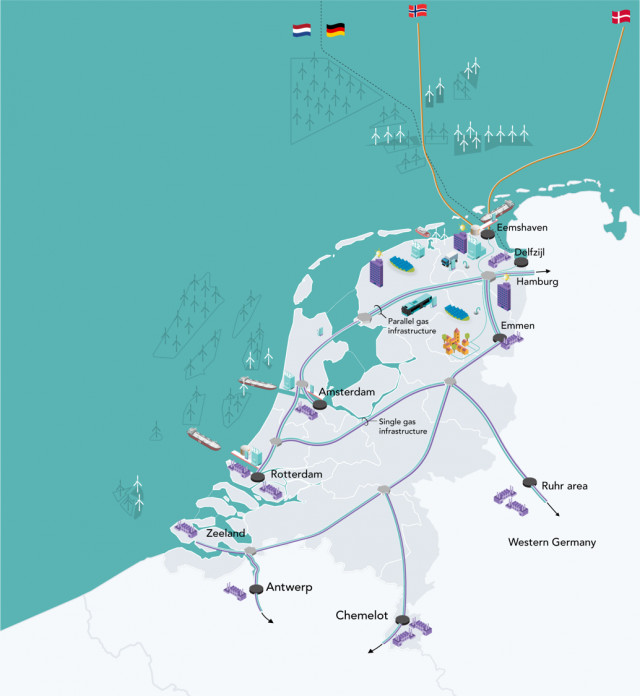 The plan includes investments totalling up to 9 billion euros and could secure some 66,000 existing jobs in areas like gas infrastructure and mobility and help create between 25,000 (in 2030) and 41,000 (in 2050) new jobs in areas like maintenance and operations. The parties in the Northern Netherlands want to play a pioneering role in this area, ahead of implementation throughout the rest of the country and Europe.

The companies are ready to jointly develop more than 50 projects spanning the entire supply chain (production, transmission, storage and end use). The plans will be implemented in stages, but before they can be developed further, in 2021 the Dutch government will need to approve additional capacity for offshore wind energy and provide a regulatory framework and financial support.

Significant steps have already been taken in recent years, and sizeable investments in hydrogen have been made in the northern reaches of the Netherlands. International companies like Engie, Equinor, Gasunie, RWE, Shell and Vattenfall, as well as SMEs, have already committed themselves to various hydrogen projects, and this trend is gaining momentum.

Regional and local authorities have increased their commitment to making the hydrogen supply chain in the northern Dutch provinces a reality.

In the north of the country, the parties involved are asking the politicians to support and facilitate these billion-euro investments. New regulations and financing are needed to ease the way for the developments and to accelerate the construction of offshore wind farms.

Those involved at the highest political level in the Netherlands have also asserted their commitment to the development of green hydrogen, not only in and for the northern parts of the Netherlands, but especially throughout the Netherlands and Europe.

The investments in the north of the country and the experience gained – with this ‘Hydrogen Valley’ serving as a testing ground, – are the prelude to a national roll-out specific to the other regions, and will ensure that the Netherlands plays a pivotal role in Europe.