MHI Vestas delivers first-ever components to Able Seaton Port for offshore wind, including 15 blades produced at the Isle of Wight and finished at Fawley. 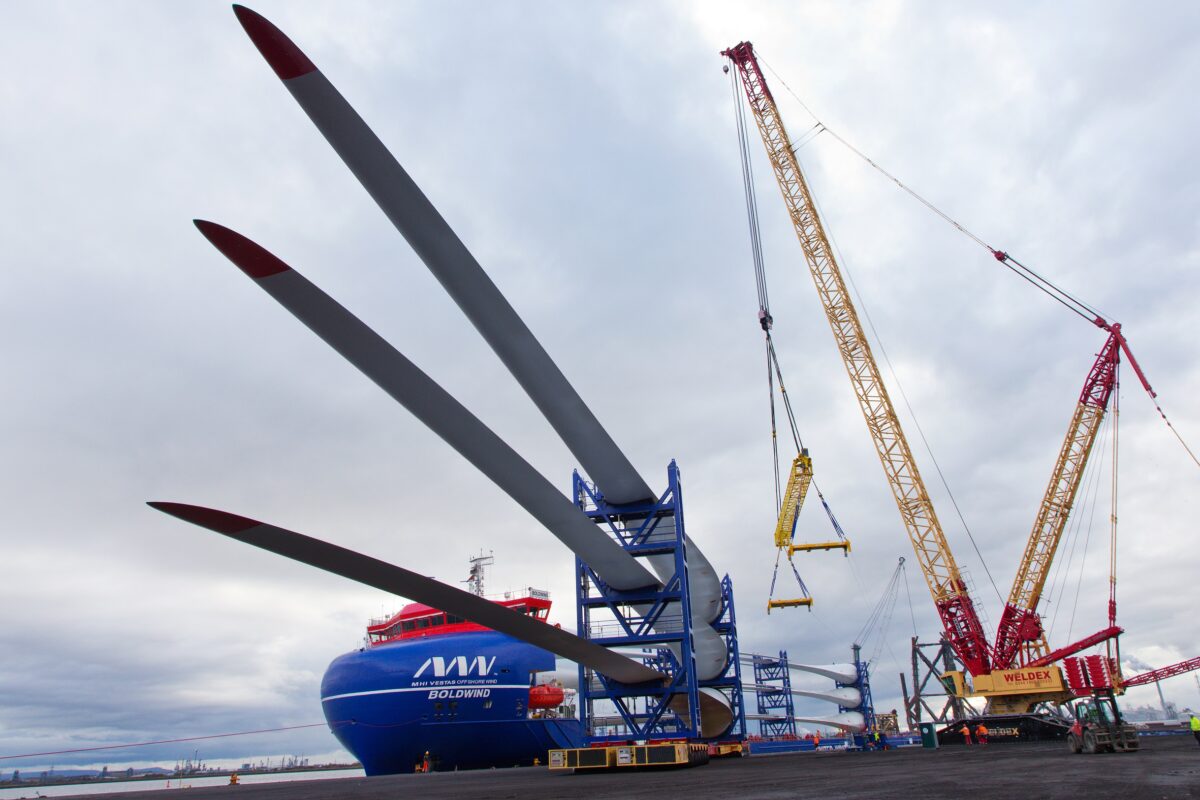 Triton Knoll is marking a series of project ‘firsts’ as turbine blades destined to be installed at the 857MW offshore wind farm, arrive at its chosen construction port in Teesside.

Able Seaton Port, near Hartlepool, is receiving offshore wind turbine components for the first time in its history, after a combined multi-million pound investment has helped transform the port into a specialist assembly and construction facility for use on the project by turbine supplier MHI Vestas Offshore Wind.

Triton Knoll, which is being constructed by RWE, will install and operate 90 MHI Vestas state-of-the-art V164-9.5 MW turbines, each stretching 164 metres tip to tip, and capable of powering a typical home for up to 29 hrs with a single rotation of its 80 metre long blades.

The first 15 turbine blades to arrive at the port were manufactured by MHI Vestas at its Isle of Wight UK facility and finished at its Fawley plant across the Solent.

MHI Vestas Project Director Torben Damsgaard said: “We are proud that first components, including our blades from the Isle of Wight, for the V164-9.5 MW turbines have now been delivered to the pre-assembly site at Able Seaton. Our V164 turbines are currently the largest turbines installed in commercial projects in the world, and the 80m blades to be used at Triton Knoll will be the largest blades installed in UK waters.”

“MHI Vestas is committed to the UK, as not only are these world-leading blades produced in the UK, but the Triton Knoll project as a whole is bringing substantial value to local communities. The successful preparation of the Able Seaton site has been one key value driver, as the joint effort by AbleUK and MHI Vestas to prepare the site will pay dividends to the Teesside region as an offshore wind hub for the present and future.”

Julian Garnsey, Project Director for Triton Knoll and RWE Renewables, said: “Triton Knoll has made a significant investment into Able Seaton Port to establish wind turbine handling facilities there for the first time. It’s an investment that secures the North East of England at the very heart of the delivery of Triton Knoll, and which leaves a lasting legacy for future offshore wind farm projects to be constructed from the region.

“At Triton Knoll we remain committed to ensuring that our investments from this flagship project benefit local coastal communities, and the UK’s expanding offshore supply chain as much as possible. We are delighted to be working with MHI Vestas and Able UK delivering this new UK infrastructure, and to see the first Triton Knoll components arriving at Seaton, ready to begin installation early next year.”