The Nezzy² floating wind turbine is being tested at sea for the first time in Greifswald Bay. 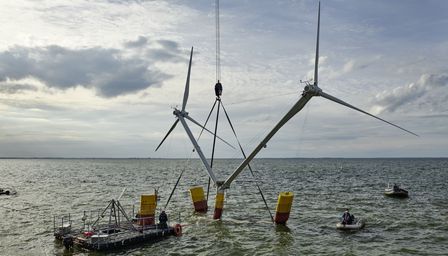 Until now, offshore wind turbines have been anchored to fixed foundations in the seabed at maximum depths of 50 metres. Floating turbines have the advantage that they can be deployed in deeper waters. “The potential is huge. Looking ahead, the new technology will open up new countries and marine areas with greater water depths for offshore wind power,” explains Hannah König, head of wind and marine technology at EnBW. As well as supporting their development, EnBW also plans to deploy the floating turbines itself. “France especially is an attractive market for us,” says König.

Three months, Nezzy² has been successfully tested in a flooded gravel pit near Bremerhaven. Now, the turbine is floating 650 metres off Vierow port, where it is anchored with lines to the sea floor. After the approval by the responsible authority the two companies will examine how the floating turbine performs in wind and wave conditions. If the Baltic Sea trials are successful, a full-scale version of Nezzy² will be put through its paces in China in late 2021 or early 2022.