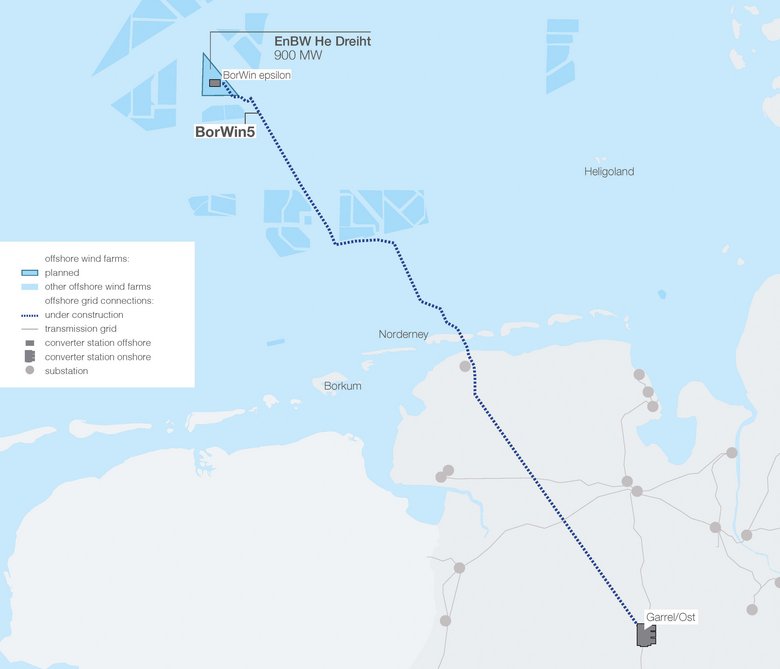 “With regard to our latest offshore project, we are delighted to not only award the contract to Siemens and Dragados, two companies that are both proven and innovative in the construction of converters but also to NKT, another powerful supplier in the market for plastic-insulated direct current cables,” said Tim Meyerjürgens, COO of TenneT.

BorWin5 is the 15th offshore grid connection system to be realised by TenneT in the German North Sea and also the twelfth direct current connection.

BorWin5 is the second project after DolWin5, in which the wind turbines are directly connected to the offshore platform BorWin epsilon via 66-kilovolt three-phase power cables. This eliminates the transformer stations that were previously required in every wind farm. In addition, 155-kV three-phase current cables are no longer required to connect the TenneT offshore platform with the wind farm.

By means of a 230-kilometre-long extra-high-voltage direct current cable, TenneT transmits the electricity to the Garrel/East converter station on land after conversion using low-loss direct current technology. Here, the direct current is converted back into three-phase alternating current and fed into the extra-high voltage grid. With the 66 kV direct connection, BorWin5 belongs to the new generation of cost-efficient offshore grid connections, which make an important contribution to the energy transition.

With the innovative 66-kV connection, the wind farms will be directly connected to the TenneT offshore platform. This means that transformer stations in the offshore wind farms are no longer necessary.