Scotland’s seabed is being opened up for new wind farm projects for the first time in a decade.

Crown Estate Scotland, which manages the seabed, says it could lead to billions being invested as part of a green recovery.

It says ScotWind could deliver more than enough green electricity to power every Scottish household.

The investment value from the leasing round has been put at about £8bn.

More than six million tonnes of CO2 saving could be made annually once the wind farms are operational. 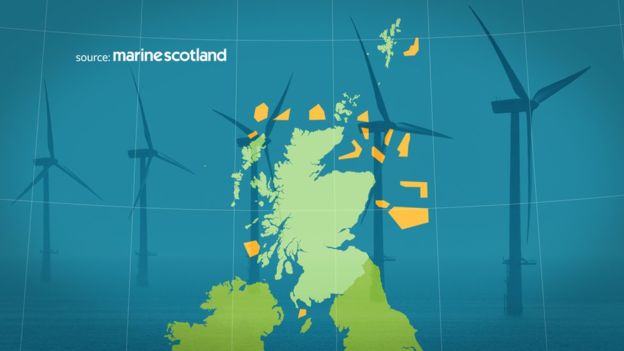 “Offshore wind is currently one of the cheapest forms of new electricity generation and Scotland is perfectly poised to host major new projects, with a well-established energy skills sector as well as some of the best natural marine resources in Europe.”

The bidding process begins on Wednesday and is expected to be completed by March 2021.

It is estimated that about 10 new sites will eventually be chosen for new wind farm developments, mainly around the east and northern coasts of Scotland.

Potential sites off the west coast of Lewis and Islay have also been identified by Marine Scotland along with the sea near Luce Bay in Dumfries and Galloway.

Energy Minister Paul Wheelhouse said: “As we emerge from the crisis, we have a chance to re-imagine the Scotland around us, and to begin building a greener, fairer and more equal society and economy, one in which wellbeing, fair work and social justice are prioritised.

“Our seas are host to some of the best offshore wind resources in the world, supporting the continuing growth and expansion of the sector.

“We want to harness this huge resource for our energy system, unlocking significant investment in the supply chain to create more green jobs across the sector and, importantly, to do so in a way that gives due regard to our marine environment and other marine activities.”

It is likely to take up to five years for the design and planning process to be completed and construction to begin on the first successful application.

All wind farms are likely to be operational by the end of the decade.

Claire Mack, chief executive at Scottish Renewables, said the announcement provided a “blueprint for the further expansion of an industry which is creating economic and environmental benefits across Scotland and helping meet our emissions targets as we progress towards net zero”.

She added: “Government and industry must now work together to maximise offshore wind deployment, and the supply chain opportunities which come with it, by removing barriers, investing strategically and making the right decisions, at the right time, to ensure this exciting sector has the confidence it needs to thrive at a global scale in the coming decades.”