Realising the potential of offshore wind power off the west coast alone could generate annual revenues of €21bn a year from 75,000 megawatts of installed capacity, Airtricity and Mainstream Renewable Power founder Eddie O’Connor has said. 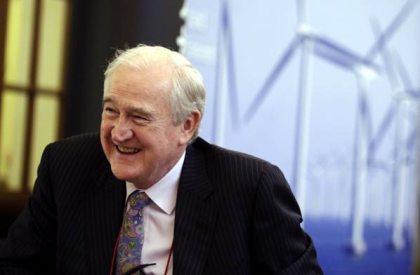 Speaking to the Sunday Independent, the renewable energy entrepreneur said it would be worth €21.4bn. “This could be huge, at 1.6 times the value of our single biggest indigenous industry, agri-food and marine, worth €13.7bn. This would require €150bn of investment in turbines, foundations, equipment and port infrastructure. The State would receive about €530m a year in licensing and rental fees, plus further exchequer returns from employment and corporate profits from it, and spin-off economic activity. Ireland could supply 5pc of Europe’s electricity needs if this was connected to a European supergrid. The ports on the coast are very interested in this – Foynes, Killybegs, Galway, for example,” he said.

O’Connor added that 5,000 megawatts of offshore wind power would effectively make Irish farms carbon neutral. “This would cancel out the impact of the 20 million tonnes of greenhouse gases generated largely by cattle and sheep,” he said.

He also called for the sector to have a single State point of contact, ideally headed by an accountable minister. “There are 11 government entities that deal with some aspect of offshore wind, and no one co-ordinating element. In Britain, it’s a similar story, with various entities involved, yet they’ve been much more successful. This is where Ireland can get its act together. We need a minister with the power to get things done, ideally in the Department of the Taoiseach or Finance. Until we get that, we’ll have all these silos of the government.”

Adviser Rothschild is sounding out potential buyers or partners for Mainstream Renewable Power, in which O’Connor has a 55pc stake, potentially worth €550m. “We need a partner or an owner that either has a huge customer base or has access to almost infinite funding. We need as big a balance sheet as we can have for our ambitions, which need trillions of investment,” he added.