It is estimated that the fields will be capable of producing up to 1.5 billion m3 of gas per year and 2.8 million barrels of crude oil and condensate per year.

Phase one of the development includes the installation of a new central processing platform (CPP) called Golden Star. The breadth of ALE’s offshore expertise and experience led to them being awarded several stages in the project’s first phase.

First, the CPP needed to be supported by a jacket weighing 12,733t – the biggest to ever be installed in Vietnam. The size of the jacket, with dimensions of 131m x 81.7m x 56m, led to ALE determining a strand jack load-out to be both the most feasible and cost-effective solution.

The combination of ALE’s specialist offshore division, combined with their local teams, enabled them to utilise their global experience of offshore jacket load-outs and mobilise a range of equipment swiftly.

The jacket was to be loaded-out onto a barge from VietvovPetro shipyard in Vung Tau and then towed to the launch location. There was a considerable amount of preparation required for the manoeuvres.

Extensive engineering preparations took place that had to consider the vast size of the jacket. It was too large to be lifted by a crane and its structural design meant an SPMT load-out was not practical either.

ALE’s offshore engineering team worked closely with the client to liaise with their own engineering team for the most efficient operation, as well as the marine warranty surveyor to ensure HSQE standards were met while preparing engineering and design documents. Alongside the engineering design for the load-out manoeuvre, ALE also designed bespoke dead man anchors and strand jack supports, as well as performing the ballasting calculations.

The jacket was built on skid beams and a launch truss, with breakout jacks used to move the jacket from its initial position before strand jacks and winches began the pulling operation.

The barge was equipped with high-capacity submersible external ballast pumps, which were synchronised with the barge’s internal ones. The internal ballast system was then used for deballasting with ALE monitoring and controlling the ballasting from the bridge. 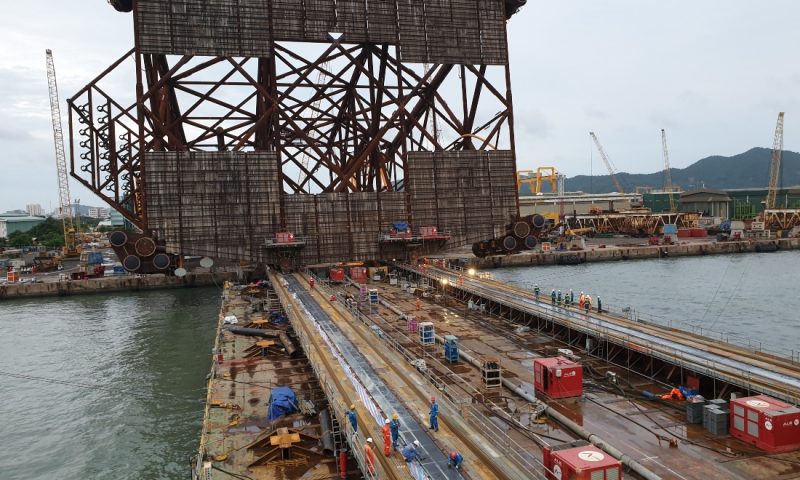 There was also an additional backup control room on the quayside. A load-out supervisor was in direct communication with the ballasting control room, enabling ALE to provide a safer and more efficient operation.

The next stage of the project will involve the load-out of the living quarters and topside. Sao Vang and Dai Nguyet CPP is expected to start producing gas and condensate in late 2020.