Construction of the Neart na Gaoithe (NnG) offshore wind farm is now underway following confirmation from EDF Renewables that financial close for the project has been achieved. 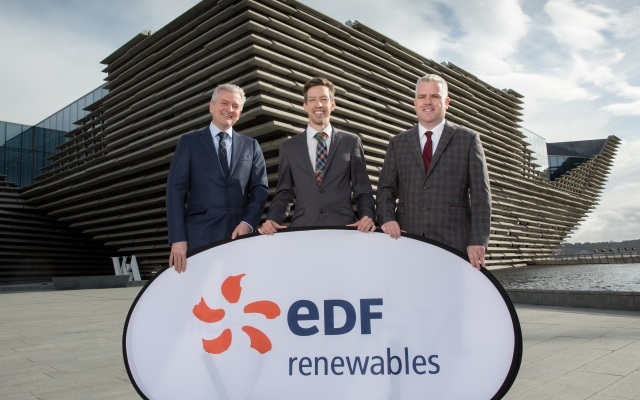 Twenty-five financial institutions are lending money to fund the wind farm which will supply enough low carbon electricity for around 375,000 homes.

EDF Renewables is also announcing that leading Irish energy company ESB is taking a 50% stake in the project.

NnG has a capacity of c. 450 megawatts (MW) of low carbon energy and will offset over 400,000 tonnes of Co2 emissions each year. Construction of components is now underway, offshore construction will start in June 2020 and full commissioning will complete in 2023.

EDF Renewables UK CEO Matthieu Hue said: “These are hugely important milestones for the project, and a great credit to the EDF Renewables team. We are excited to get work under way with our new equity partner ESB, our contractors, and all Scottish companies and stakeholders participating in the project. The 450 MW NnG project will play an important role in de-carbonising the UK electricity system and is a further example of EDF Renewables continuous investment and growth in Scotland.”

Pat O’Doherty, Chief Executive of ESB, says that the significant acquisition represents another key milestone in the company’s investment in offshore wind. “Our 50 percent stake in Neart na Gaoithe fits entirely with ESB’s Brighter Future strategy to build a balanced low carbon generation portfolio of scale. Offshore wind is one of the main technologies underpinning the clean electricity systems that will power our societies into the future. This investment in the Neart na Gaoithe project builds on significant ESB involvement in offshore wind off the Irish coast as ESB develops its experience to assist Ireland deliver its Climate Action Plan. We look forward to pooling our expertise with EDF Renewables in delivering this major project.”

Following successful development of the site, NnG will now move in to a full lease with Crown Estate Scotland to allow the construction and operation of the wind farm.

NnG will bring a further boost to the offshore wind industry in Scotland, providing new jobs and manufacturing opportunities.

EDF Renewables UK has already increased its Edinburgh team from 44 people to over 100 people at the Atria One building in Scotland’s capital city.

All of the project’s 54 turbines will be assembled at the Port of Dundee before being sailed to the site and the Scottish engineering firm BiFab will build a number of the foundation jackets.

Project servicing and maintenance will take place at the Scottish NnG Operations and Maintenance base where there will be 50 permanent jobs over the 25-year lifetime of the wind farm. The preferred supplier at this stage is Eyemouth Harbour.

NnG Project Director Matthias Haag said: “It is a great day and we look forward to working with all the teams on what will be a fantastic project for Scotland and for EDF Renewables. Each of our main contractors will be introduced to further Scottish contractors through the Forth and Tay offshore cluster which we have supported since it was formed this year. It is designed to maximise local supply chain and employment opportunities as much as possible.”

EDF Renewables also is announcing some of the project’s Tier One contractors. The NNG offshore wind farm will have fifty four (54) eight (8) MW wind turbine generators (WTG) which will be supplied by Siemens Gamesa Renewable Energy (SGRE).

The foundations for the turbines will be supplied and installed by Saipem. There will be fifty four (54) WTG foundation jackets with a number being made by BiFab. These are used to support and anchor the WTG’s to the seabed. Saipem will also supply and install and additional two (2) jackets for the offshore substations (OSS).

The supply of the onshore and the two OSS’s, plus electrical design work, will be carried out by GE Renewable Energy’s Grid Solutions business together with its consortium partner HSM BV.

Prysmian Group will supply and install the export cable, both offshore and onshore. Two offshore export cables, approximately thirty seven (37) km long, will connect the OSSs to Thorntonloch Beach in East Lothian. The onshore cable will connect the offshore cables to the onshore substation located at Crystal Rig in the Lammermuir Hills, approximately twelve point three (12.3) km away.

DEME Offshore has won the contract for engineering, procuring, constructing and installing (EPCI) the inter-array and interconnector cables with offshore installation expected in 2021. The layout will include twelve separate sixty six (66) kV array strings, connecting the WTGs to the OSSs in three  loops to each OSS. The interconnector will connect the OSSs together and allow WTGs to export electricity through the export cables.

Fred Olsen Windcarrier will be delivering the transportation and installation of the WTGs with offshore installation expected in 2022. The vessel Blue Tern will be used for the works with the Port of Dundee as the loading harbour for the wind turbines.

This project demonstrates EDF Group’s strong ambition in being a leading global player in the offshore wind industry. It confirms a wider commitment to renewables in countries where EDF already has a strong footprint such as the United Kingdom. The project is consistent with the CAP 2030 strategy that aims at doubling EDF’s renewable energy generation by 2030.