According to a SUN DAY analysis, renewable energy electrical generating capacity has now surpassed that of coal for the first time. 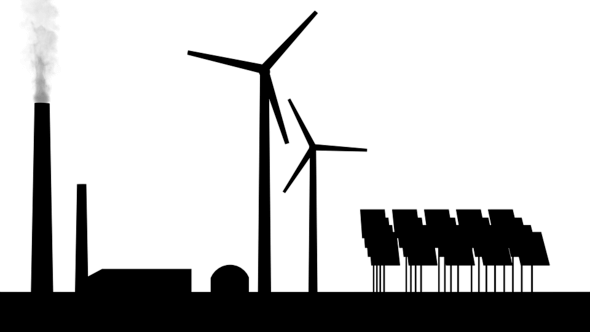 The shares of fossil and renewable energy in the electricity mix are shifting (image: Pixabay).

Not even Donald Trump can help anymore, because the U.S. President and declared coal supporter got caught up by reality.

According to an analysis reported by Electric Energy Online, coal’s power generation capacity in the U.S. has been overtaken for the first time by renewable energy sources (biomass, geothermal, hydro, solar and wind).

The data is based on the monthly publications of the Federal Energy Regulatory Commission (FERC), the U.S. federal agency that governs the transmission and wholesale of electricity and natural gas and the transportation of oil through pipelines in interstate trade. They were analysed by SUN DAY, a non-profit research and education organization founded in 1992 to aggressively promote sustainable energy technologies as cost-effective alternatives to nuclear power and fossil fuels.

According to FERC’s most recent monthly report, the ‘Energy Infrastructure Update’, which includes data up to April 30, 2019, 18 wind farms with a total capacity of 1,545 MW and 102 new solar farms with 1,473 MW were connected to the grid in the first four months of the year. Together with four new hydropower plants (29 MW), SUN DAY says this volume is sufficient to increase the share of renewable energies in the total installed U.S. power plant capacity to 21.56%. In comparison, the share of coal fell to 21.55% (compared to 23.04% in the previous year).

However, capacity is not the same as actual generation. The capacity factors for nuclear power and fossil fuels are generally higher than for most renewable energies. Power plants are usually not operated continuously under full load, but at certain times also under partial load or taken out of operation for maintenance. The total work performed by the plant in one year is therefore smaller than the maximum possible in the same period, which explains the higher annual utilisation rate or capacity factor for fossil power plants derived from the number of full load hours. For example, the U.S. Energy Information Administration (EIA) reported that renewables accounted for a little more than 17.6% of the nation’s total electrical generation – that’s a bit less than their share of installed generating capacity in 2018 (over 21.2%). Coal’s share of electrical generation in 2018 was 27.2%.

Nevertheless, the share of coal-fired power continues to decline, by about one percentage point per calendar year in recent years. At the same time, the share of renewable energies is rising inexorably. The share of wind energy has risen from 6.43% to 8.25% and is thus well on the way to surpassing hydropower (8.41%) in the coming months. The share of solar systems is also rising steadily, with official statistics only including commercial solar parks, while the many systems installed on private roofs are not counted.

If FERC’s current forecasts prove correct, renewable energy will account for almost a quarter (24.15%) of the country’s total installed generation capacity over the next three years, with wind alone accounting for more than a tenth (10.01%) and sun for 4.32%. Hydropower (8.16%), biomass (1.33%) and geothermal energy (0.33%) are also included.

The prerequisite for this, however, is a stable expansion policy that doesn’t put any obstacles in the way of renewables. The current political environment poses a certain challenge to the sector, in addition to the search for workers. Tariffs on Chinese imports and the danger of new tariffs on Mexican imports will dampen growth, AWEA president Tom Kiernan recently told CNBC. Despite an agreement announced by Donald Trump last week, he threatened on Monday to impose tariffs against Mexico if Mexican lawmakers reject the agreement.

“We are very concerned about the impact of tariffs on jobs,” Kiernan said. “We would have been hiring more people if it weren’t for the current tariffs. And if the tariffs increase, as the president is proposing, that will either further reduce our growth or could at some point lead to a decline in the number of jobs in the wind industry.”

But renewable energy is currently one of the job engines in the U.S. The Bureau of Labor Statistics predicts that by 2026, wind power technician will be the country’s second fastest-growing occupation, with a growth rate of 96% to more than 11,000 jobs.

“Virtually all of our companies are hiring,” said Kiernan. “We are looking for folks that want to build a career, because the men and women who are servicing a wind farm — that wind farm will be there for the next 30 years.”

The association also points out that more than 99 percent of new wind projects are built in rural areas. In other words, exactly where the jobs in the coal industry will be lost. 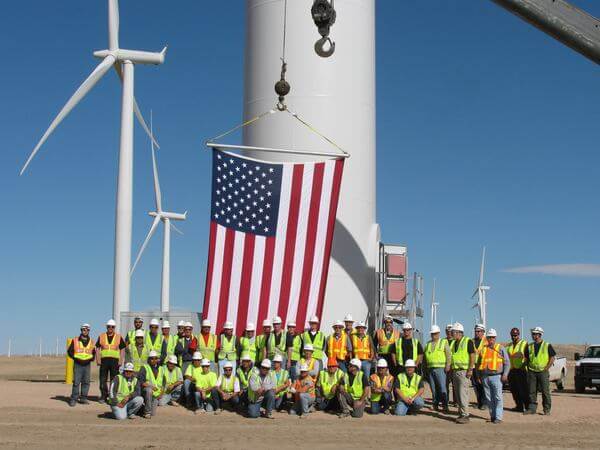 Employees for the wind industry are currently in great demand in the US (image: AWEA).