A Taiwanese company involved in an international offshore wind power project recently held a groundbreaking ceremony  for the construction of a plant for wind turbine tower manufacturing at Taichung Port.

This marks a milestone in the country’s power generation.

Chin Fong Machine Industrial, Taiwan’s largest maker of mechanical power presses, plans to build the manufacturing facility in line with the government’s policy of promoting the development of green energy.

Chin Fong said it plans to invest an estimated US$25 million in the purchase of related equipment and put the plant into production on a trial basis in the fourth quarter before it goes into mass production next year. 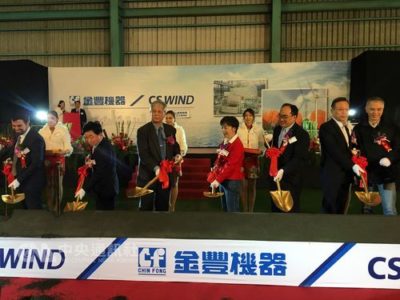 At least 100 towers are expected to be produced per year, according to a company estimate. Calculating based on the sale price of US$1 million per tower, the company’s annual revenue is expected to reach US$100 million, the company said.

CS Wind, which is a supplier of onshore and offshore wind turbine towers to Siemens Gamesa, has expertise in tower manufacturing and will help Chin Fong secure orders in the initial period after the plant goes into operation, Chin Fong said.