The REM Saltire, a 111-metre, 9603 GT subsea construction vessel owned by REM Offshore, at the start of 2019 completed a reconfiguration programme at Damen Shiprepair Vlissingen (DSV).

From 27 December to 15 January, the vessel first underwent the demobilisation of a Q1600 Trenchertrenching system under the supervision of international marine contractor Van Oord, before being mobilised for its next contract by Oceaneering AS.

An initial short period was spent alongside to remove Van Oord’s innovative new Dig-It (Q-trencher 1600), which the group had deployed on board the REM Saltire under the contract with Ørsted to transport, install and bury infield cables for the Borkum Riffgrund 2 offshore wind farm.

The vessel then spent three days in the yard’s open-air dry dock to have the seals on its thrusters serviced as ordered by REM Offshore. 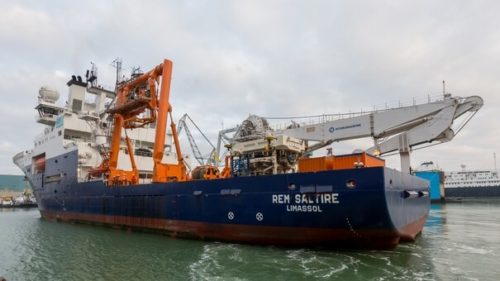 While this was going on the preparations for removing the remaining deck structure, so that when the vessel was afloat once again a crane could lift the Dig-It up and onto the quayside and works start immediately on returning the deck to its standard format and condition. Meanwhile, more work was taking place ashore, preparing the components that Oceaneering would require to ready the ship for her next contract.

The mobilisation works required for the REM Saltire’s upcoming, two-year contract on the other side of the Atlantic involved the fabrication and installation of a sub frame as well as the fitting of a winch and an A-frame. This is to prepare her for the receipt of ROVs and other deck equipment that will be fitted for the project when she arrives in the USA. A 60-tonne subsea crane was also positioned on the aft deck and secured with sea fastenings.