Equinor submitted a winning bid of USD 135 million for lease OCS-A 0520. The company will now have the opportunity to explore the potential development of offshore wind farms to provide the region with a significant, long-term source of renewable electricity.

“We are excited to have secured this attractive opportunity, Equinor’s second offshore wind lease in the United States. This acquisition complements our existing position on the US East Coast and gives us a foothold to engage in the Massachusetts and wider New England market, a region notable for its strong commitment to offshore wind,” says Christer af Geijerstam, president of Equinor Wind US.

The new lease located south of Massachusetts and east of New York gives Equinor a strong strategic position. The company now holds leases within reach of some of the most important markets for offshore wind in the US. Equinor firmly believes in the long-term regional potential for offshore wind as a major local source of renewable, reliable and cost-effective energy. 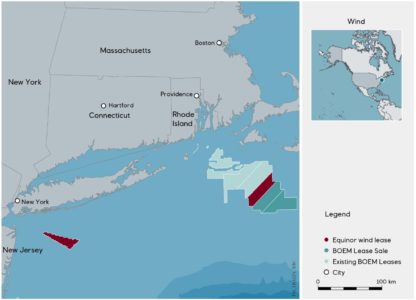