The order, which coincides with a keel laying ceremony for SBM’s first Fast4Ward hull at the Shanghai shipyard, has been made before any engineering, procurement and construction (EPC) contract for the second hull. The Dutch company cited “continuing positive industry outlook” in its move to order the second floater.

“The timing of our Fast4Ward strategy fits in perfectly with the market upturn,” said SBM Offshore CEO Bruno Chabas. “We have been preparing for this exact scenario since 2014 and today, we see tangible evidence of how Fast4Ward matches the industry’s need for cost-conscious, standardized solutions, which de-risk and accelerate projects.”

The FPSO is designed to produce 220,000 barrels of oil per day and will have associated gas treatment capacity of 400 million cubic feet per day, as well as water injection capacity of 250,000 barrels per day. 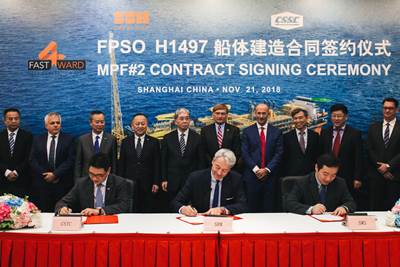