A subsea power line set to link the networks of Denmark and the Netherlands reached the Dutch coast last Friday as part of plans to share excess electricity from wind farms and other sources.

The 325 km long Cobra cable, short for Copenhagen, Brussels and Amsterdam, has a capacity of around 700 megawatts (MW) and is expected to become fully operational in the third quarter of 2019.

“This is an important step towards the integration of electricity networks in western Europe,” said Jeroen Brouwers, spokesman for Dutch grid operator TenneT.

“We will now have the first link between the Netherlands and Denmark, adding to existing connections with Norway and Britain.” 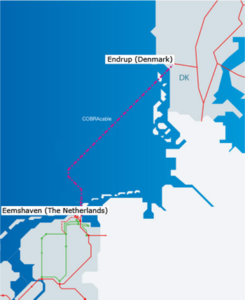