For many on- and offshore personnel it is a well-known installation on the North sea.

Since its introduction in 1982 on the North Sea many have worked on or with the jack-up installation. Initially as Neddrill 3 and later known as the Noble Ronald Hoope and consequently Paragon C-463, the 3-legged drilling unit is presently known as Caprio under its new owners.  After a 2 year period in the port of IJmuiden, the unit was transported under guidance of the Offshore Marine Contractors BV (OMC) Towmaster to Vlissingen.

The 1982-built unit was towed by the Zeus of Finland, Ginger and Multratug 29 and arrived at Vlissingen 5th of October and consequently entered the harbour with assistance of the Multratug 20 en Multratug 9 to position the unit inside the port. 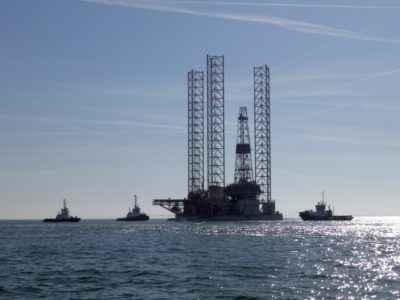