DEME’s Board of Directors announces that on 1 January 2019 Luc Vandenbulcke will succeed Alain Bernard as the company’s CEO.

Alain Bernard (aged 63) started working for the group in1980 and has been CEO of DEME since 2006. Over the past 12 years he transformed the group from a purely dredging organisation into a diversified marine engineering group with operations worldwide. Under his leadership sales figures increased from €1.1 billion to €2.4 billion (2017), while DEME’s fleet became one of the most innovative and diverse in the industry. 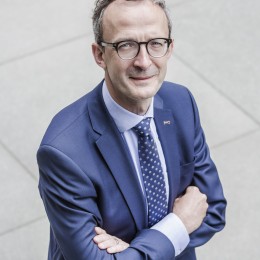 Luc Vandenbulcke (aged 47) (KU Leuven, civil engineer) has worked at DEME Group for the past 21 years. He is the founder and CEO of GeoSea which, since its foundation in 2005, is one of the fastest growing and most successful activities of the DEME Group. Since 2011 Luc Vandenbulcke is also DEME’s Deputy COO and member of the management team.

From the beginning of next year Alain Bernard will focus on his role of among others Director at DEME and its affiliated companies, Chairman of the Board of DEME Concessions SA and Global Sea Mineral Resources SA (GSR) with a view to further supporting the growth of the group.