Windhoist Limited is delighted to announce that a contract has been placed by Siemens Gamesa Renewable Energy (SGRE) for the company to carry out onshore turbine pre-assembly work for the Hornsea One offshore wind project in Hull, the world’s largest offshore wind farm to date.

With a global wind track record exceeding 11GW, this is the second commercial-scale offshore wind contract secured by Windhoist in 2018 coming on the back of a similar success on the Beatrice project, currently being loaded out from Nigg in the Moray Firth.

Windhoist will commence works this month and the project is anticipated to run for almost one year, sustaining over 100 employees on site for the duration of the project.

The contract requires Windhoist to provide onshore pre-construction support for 174 Siemens SWT-7.0-154 turbines; standing 190m tall, each completed turbine will be larger than the Gherkin in London. With deployment across 2019, Hornsea One, when completed, will be the largest offshore wind project in the world at 1.2 gigawatts (GW) and will produce enough clean energy to power over 1 million UK homes. 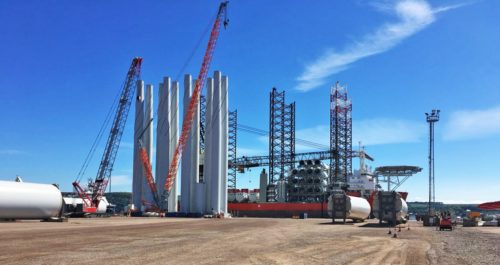