This is HST’s second FCS 2710 since becoming the launching customer for the vessel type earlier this year.

The FCS 2710 builds on the success of its predecessor, Damen’s FCS 2610. The new design is upgraded to deliver more flexibility, more tank capacity, greater deck space, increased comfort and more accommodation. Damen has achieved much of this by increasing the length and height of the vessel above water by 1 metre. The increased height enables the FCS 2710 to operate in wave heights over 2 metres, greatly extending operability.

HST is a relatively new entrant to the offshore transfers sector. Based in Swansea, Wales, the company is led by three experienced offshore industry operatives, Chris Monan, Tom Nevin, and Ian Oxford. Damen delivered the first FCS 2710, HST Hudson, to HST back in July, during the Seawork exhibition in Southampton. HST Hudson was named for Hudson Nevin, eldest son of director Tom. Following in this tradition, the second vessel will be named HST Sofia, for the eldest daughter of director Chris Monan. Damen will build HST Sofia to the same specifications as the first vessel. 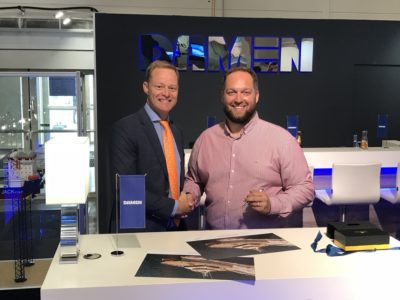