The global offshore wind energy market has been set ablaze with a number of projects that have recently commenced power production. For instance, following the installation of its first 7-MW turbines, Scotland’s biggest offshore wind farm has sent power for the first time to the National Grid.

The Race Bank offshore wind farm in the U.K. and reportedly the fifth-largest wind farm on the planet has also officially opened recently in the month of June. This 91-turbine facility is expected to produce 573 MW of electricity and is capable of powering more than half a million homes every year. 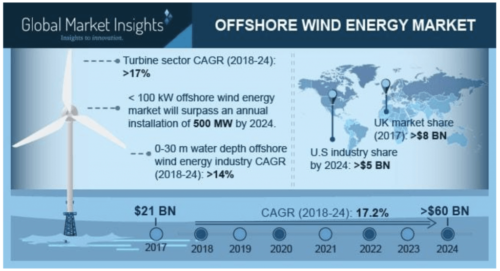 Considering the above-mentioned instances, there is no doubt that the fledgling offshore wind energy industry is finally reaching maturity, promising gigawatts of reliable and clean energy and billions in economic and investment opportunities. In fact, wind is touted as one of the fastest-growing renewable energy sources in the world and has become a viable electricity generating source in more than 80 countries worldwide.

Analysts deem that the developments in technology have paved the way for more reliable and effective equipment and machinery, which has resulted in the growth of the global offshore wind energy market.

Quietly surpassing the U.S., China’s wind energy market had emerged as one of the largest in the world in 2010. From being a mere player in 2001, the country, on the basis of strong government support and investments, has transformed its position as a market leader.

As per reports, China had an installed offshore wind capacity of more than 1.6 GW in 2016. As a part of its five-year plan, the country plans to have 5 GW grid-connected by 2020. Currently, China is on target to install 13 GW over 2017 to 2026, bringing its total capacity to nearly ten times as of its level in 2017.

Furthermore, in order to increase rural electrification and lower its carbon footprint, China is expected to continue to promote wind power, in turn stimulating the regional offshore wind energy industry. The country in 2016 outpaced Denmark and secured third place in the global offshore wind energy rankings with the UK and Germany holding the top two positions.

Rested, a renowned Denmark based energy firm has recently announced that the construction has begun on an even bigger wind farm called the Hornsea Project One, which is slated to be operational by 2020. Upon completion, this plant will be capable of supplying clean energy to more than one million homes. Such robust investments in the UK & Germany offshore wind energy market has driven Europe to contribute substantially to the global offshore wind power, while simultaneously establishing itself as a lucrative hub for investments. Reportedly, the UK offshore wind energy market was worth more than USD $8 Billion in 2017.

Upon analyzing these regional trends, it would be safe to quote that China, U.S., UK, Germany, Taiwan, and the Netherlands are the biggest offshore wind energy market in the world, with a number of current projects both under construction and planning phase.

The offshore wind energy industry is further gaining exceptional traction from the tech behemoths showing their interests in harnessing clean energy. Microsoft, for instance, has recently signed an agreement with GE to purchase electricity from its wind farm and power its cloud data centers in Ireland. The Silicon Valley bigshots Apple & Facebook are already in this league harnessing the clean power and pledging its operations to be 100% from the renewable energy sources. Moreover, Google in the year 2010 has also thrown its financial clout behind new wind farms off the U.S East Coast.

Link to report page is – https://www.gminsights.com/industry-analysis/offshore-wind-energy-market