Following its recent entry into Taiwan, German energy company EnBW has now expanded its activities to the U.S. with the formation of a joint venture with Trident Winds.

The joint venture is going to develop an offshore wind project off the coast of central California.

EnBW North America and Trident Winds, based in Seattle, have formed a joint venture to advance the 650–1,000 megawatt Morro Bay offshore wind project off the central coast of California.

EnBW sees floating technology as a key technology as it opens new areas with greater water depth and better wind conditions. The company cites the high potential of the American market, as several states have set ambitious goals for the expansion of offshore wind. EnBW is targeting California first due to its strong economy, continuously growing energy demand and ambitious renewable energy and climate goals.

“Offshore wind development on the West Coast of the U.S. is still at an early stage,” said Dirk Güsewell, Head of Generation Portfolio Development at EnBW. “The state of California, which is aligned with our home market of Baden-Württemberg through a 2015 joint commitment to climate protection, renewable energy and sustainable mobility, has some of the most ambitious climate and renewable energy goals in the country. Hence, offshore wind is positioned to play an important role in California over the next decade.”

Offshore wind development in the U.S. has become considerably more dynamic in recent years: in 2015 the U.S. Department of Energy published a nationwide wind study, which contemplates 22 gigawatts (GW) of wind energy deployment by 2030 and 86 GW by 2050. The first offshore wind farm is now in operation. At the same time, the states of Massachusetts, New York, Maryland and New Jersey have established specific targets for offshore wind development: according to targets that have already been released, up to 8GW of offshore wind should be in operation by 2030.

In April this year, California’s Redwood Coast Energy Authority selected a floating offshore wind solution for a project of the Northern California Coast. A consortium consisting of Principle Power, EDPR Offshore North America, Aker Solutions, H. T. Harvey & Associates and Herrera Environmental Consultants was one of six respondents to the Request for Qualifications issued on February 1, 2018. They beat other contenders including Statoil, EDF, Trident Winds and North Coast Floating Wind.

The wind farm will be the first commercial-scale project for floating offshore wind in the U.S. and is expected to be operational by 2024. The proposed project calls for a 100-150 megawatts floating offshore wind farm located more than 20 miles off the coast of Eureka. The wind resource in the area are the best off California with average wind speeds of more than 10 meters per second. 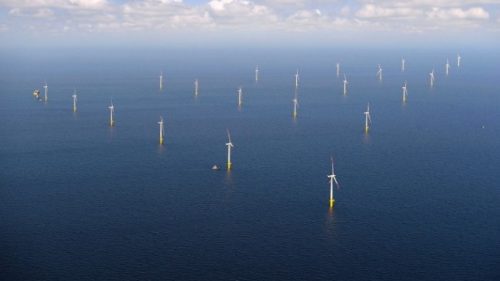 Along the West Coast of the U.S., waters reach impressive depths close to shore, demand for renewable energy is increasing and the winds are generally strong and consistent, says Principle Power. The United States’ National Renewable Energy Lab (NREL) estimates that over 800 GW of energy potential is available to floating offshore wind technologies off the West Coast.