Gazprom leads in total production outlook among NOCs to 2020.

Raj Shekhar, Oil & Gas Analyst at GlobalData, comments: “In terms of break-even oil price, Petronas leads with lowest median of US$7.0 per barrel, across all of its planned and announced projects expected to start by 2025. Rosneft is a distant second with break-even price of US$13/bbl.” 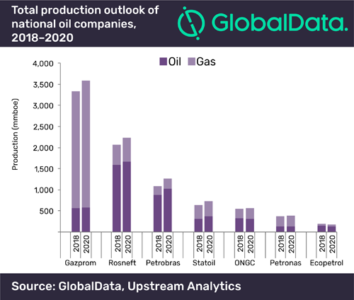 Rosneft, Gazprom and Petrobras have the lowest median for break-even gas price, US$2/mcf for each of the companies, across their planned and announced projects expected to start by 2025.

Rosneft and Gazprom have the lowest median for full cycle capex per barrel of oil equivalent (boe), with US$7.7 per boe each. Petrobras follows with US$8.2 per boe.

Rosneft had the highest merges & acquisitions (M&A) activity in 2017 with total deal value of US$10.1 billion from seven transactions, followed by Petronas with US$8.5 billion from five transactions.

In terms of capital raising activity, Rosneft also leads among the NOCs considered with US$14.6 billion in 2017 from three transactions followed by Petrobras with US$13 billion from 12 transactions.