Wave induced vessel motions are one of the most important aspects in the workability of offshore operations. Incoming weather has so many variables that it causes a significant gap between the data used in the engineering phase and the operational phase.

As it is simply not possible to analyse all weather combinations there are always relatively large uncertainties, requiring considerable safety margins. All at an overall cost of workability and project performance. It is exactly this uncertainty, the new Dutch start-up MO4 claims to eliminate. Following three years of development and intensive testing MO4 has recently launched an advanced new service: next level motion forecasting to work smarter, safer and more efficiently.

The novelty consists of an easy to use on-board motion monitoring and forecasting system enabling operators and contractors to realise significant cost savings and a proven workability increase of at least 20%. It allows the vessel staff to instantly re-assess the most relevant engineering results based on actual weather data instead of the grossly simplified data used in engineering, thereby reducing risk and enhancing the overall project performance.

The MO4 platform accurately and clearly shows how the incoming weather will impact an offshore operation. The device uses state-of-the-art ship motion algorithms combined with the world’s best weather models to generate a prediction of the ship motions of unrivalled quality. Relevant influences of cruising speed, bilge keels, anti-roll devices, free surface tanks and other parameters are meticulously incorporated. At regular intervals the forecasted motions are presented on a PC-screen in the vessel’s bridge in an intuitive and simple way, to aid the staff to make decisions based on the best available data enabling them to increase uptime and safeguard operations. A key differentiator is that MO4 enables not only the forecasting of the ship’s motion but also the cargo sway or even gangway and other active equipment on the vessel by incorporating dedicated system algorithms. This clearly indicates the utilisation of such equipment.

The MO4 device is a combined result of predictive and powerful software developed by Amsterdam-based Mocean Offshore and monitoring technology developed by Siri Marine, Appingendam. Both companies agreed to officially join forces in January this year, with Marleen Lenting being the Sales Director and Mark Paalvast the Technical Director. By signing the agreement Mocean Offshore and Siri Marine clearly showed their willingness to provide mutual transparency and the willingness to share data and experience in order to produce and market this exciting motion forecasting technology.

“Applying the high-end ship motion algorithms we have developed over the past years to the actual incoming weather instead of the assumptions made during engineering phase truly increases the accuracy and thereby reduces the requirement of over-conservative margins,” underlines Mark Paalvast. “MO4 motion forecasting can play an important role in this matter. Not only does it save both time and money, it also ensures improvement in effectiveness.”

“Our mission is to go beyond meeting our customers’ wishes. Instead, we want to participate in thinking about and formulating those wishes. Solving problems before they arise, implies that you must think ‘out of the box’ to be able to develop new and better ways of motion and condition monitoring,” explains Marleen. “We want to help our clients understand the capabilities of our era and guide them towards what we call ‘Offshore 2.0’. It implies an offshore industry where full usage of data availability and connectivity is utilised to save lives, money and the environment. It is the aim of MO4 to support this by providing the most relevant information as quickly as possible to the people who have to decide on upcoming operations.” Mark adds: “Where in the past good seamanship qualifications were enough, nowadays verification plays an important role as well. This means that a convincing and reliable proof must be provided for every decision made on board of a floating object. MO4 provides for this clarity in the decision making process, giving a captain or a project manager confidence while executing a job in a safe and efficient manner. In the past this confidence was limited. This was mainly the result of the assumptions made and not the algorithms used.”

Motion in the Ocean

As the team has a background primarily in the analysis of hydrodynamics and marine operations MO4 clearly sees a difference in approach compared to other, more meteorological parties. The tool has been developed to aid operations and therefore a bare minimum of input is requested from the operators. It has been acknowledged from the start that a simple and straightforward user interface is as important as an accurate algorithm. Mark: “The user really has to do very little. His input is limited to only specifying a description of his activities. The rest is pre-loaded by the MO4 engineering team or fully automated. Using the specifications of whatever floating object, the marine weather forecast is overlayed to predict the motion of the object and potential equipment on board, hour-by-hour for the next 4-5 days. It is obvious that out of these seven days the forecast for the first 48-hours is the most trustworthy.”

The MO4 device can be installed on board of anything that floats and moves, be it an OSV equipped with a motion compensated gangway, anchor handling tug, heavy lift vessel, offshore installation vessel, rig, FPSO, pipe-laying vessel, cable-laying vessel or fallpipe vessel. Marleen: “We provide tailor made licenses per floating object. No matter whether you want to install this specific software on one or more computers, offshore or on shore. Depending on the work to be carried out, clients can currently choose from five different modules: a lifting module, a cable laying module, a personnel transfer module, a jack-up module and a shipping module. There are more modules under development, right now.”

Groen Shipping from the Netherlands was the very first company applying the MO4 concept at the end of 2017, followed this year by Siem Offshore, Norway, Offshore Contractor Van Oord, Rotterdam, and Tideway Offshore Solutions, Breda. All four internationally well-known companies ordered the MO4 to enhance the workability of their cable-laying and support vessels.

Asked for his experience with the MO4 device Project Manager Jack Bierling of Siem Offshore Contractors said: “The MO4 cable lay module enabled us to use our CLV in November with similar workability as in the summer months using conventional methods.”

According to Technical Manager Remko van der Knaap of Groen Shipping the motion forecast service truly changed the way of working on board of their PSV vessel. Our staff feels more confident and see better workability as a result.” 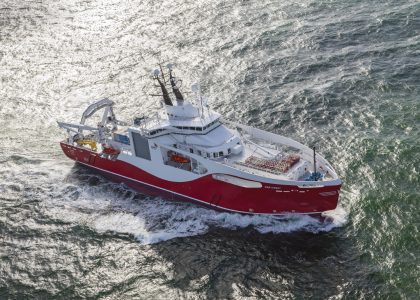