The partnership with local aquaculture company Fazenda de Camarão will allow for a commercial wave energy demonstration project on São Vicente where a wave energy converter will be installed to supply an organic shrimp farm with 100% renewable energy.

“Establishing a flagship project for sustainability will be an important milestone for our technology and will have a positive impact on all of Cape Verde,” said Fabian Brandl, SINN Power’s project manager.

As agreed in the contract between SINN Power and Fazenda de Camarão, the project will launch with a detailed feasibility study.

Over the following months, SINN Power will begin with the measuring of local wave data. An exact wave profile will be generated and several other analyses will be carried out.

As soon as the production of the seafood is fully established, SINN Power will start to protocol and measure the exact energy needs of the shrimp farm to tailor a perfectly customised off-grid system. The next step will be to install the SINN Power wave technology.

Over the next few years, SINN Power will design an energy system based on its innovative wave energy technology to supply the sustainable shrimp farm with energy. 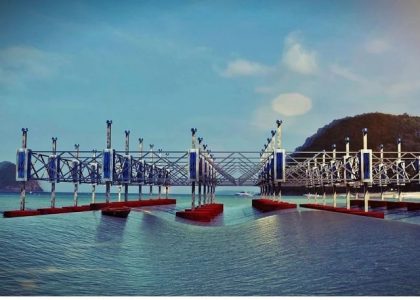