The South Korean power equipment maker said it will supply energy storage systems and other equipment for the construction of the 3-megawatt capacity wind farm in the Southeast Asian country.

Vietnam Electricity will secure the site for the pilot project and handle administrative processes, including government approval, according to Doosan Heavy.

It marked the first time that Doosan Heavy has made inroads into a foreign offshore wind power generation sector.

“The accomplishment will be a major turning point in Doosan Heavy’s renewable energy project,” Doosan Heavy CEO Park Gee-won said Thursday in a signing ceremony of the memorandum of understanding with his counterpart from Vietnam Electricity in Hanoi.

The corporate chief and other South Korean business leaders are accompanying President Moon Jae-in on his visit to the Southeast Asian country. 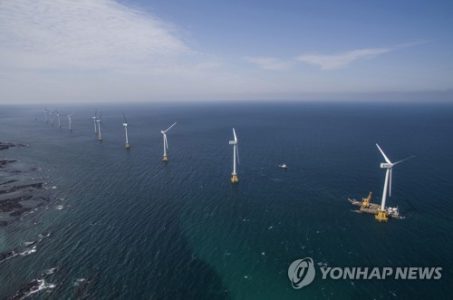