After successfully completing a drilling campaign on the D/12-A production platform near the Dogger Bank, the ‘Maersk Resolve’ drilling rig was relocated to Wintershall Noordzee’s Q/1-D platform.

The 110 nautical mile relocation of the 2009 built jack up has been co-ordinated and executed by OMC in close co-operation with operator Wintershall Noordzee and drilling contractor Maersk Drilling.

The tow and final installation of the Maersk Resolve was safely executed with the assistance of AHTS Njord Viking (210t BP), AHT Fairplay 33 (103t BP) and  the AHT Multratug 4 (75t BP) of Multraship.

After a safely executed rigmove, the 21.000 ton drilling rig was elevated to it’s operational drilling airgap at the Q/1-D platform on the 12th of March.

Coverage of this rigmove was provided by the crew of the Fairplay 33 and the Multratug 4. 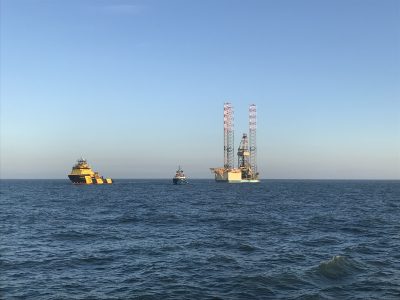