Damen Shipyards Hardinxveld is currently building a combination dredger/tug that is believed to be the first of its type to be built anywhere in the world.

This unusual order came from Baggerbedrijf De Boer B.V., known internationally as Dutch Dredging B.V., via its subsidiary De Boer Remorquage SARL.
The dredger/tug is being purchased to allow the company to fulfil a 10-year contract with Grand Port Maritime de Guyane in the ports of Cayenne and Kourou in French Guyana. Its primary role will be to undertake dredging operations in the ports and to assist vessels entering and leaving harbour.

A Damen ASD 2310 SD (Shallow Draught) tug has also been ordered and as the two ships will be the only support vessels available in either location they will also be used for surveying, the transportation of equipment and cargo up to container-sized loads, and will be equipped to handle on-the-water emergencies including fire-fighting.

Meeting the demands of such a unique brief required extensive consultation and development work. Damen led the process, with Grand Port Maritime de Guyane contributing to the development of the designs via consultant, Hydro GC. They checked and approved the design, and helped optimise the dredging-towing balance so as to achieve an equilibrium within the given specifications.

Dutch Dredging also made a significant contribution with its knowledge of the unique technique of water and air injection dredging, that it has built up over 20 years. Its experience over the past 12 years of operating in the specific conditions of French Guyana has also been very useful.

As a result the dredger/tug, designated the WID 2915, will be fitted with equipment enabling it to dredge using the Air and Water Injection Dredging (AIRSET) method. This is a hydrodynamic technique that uses water jets and air to disturb the sediment and move it up into the water column from where a nearby natural current then carries it out and away into the main body of water. It is an unobtrusive and cost-effective way to conduct maintenance dredging and does not require the physical transportation of sediment by barge or pipeline. While dredging, the WID 2915 will be fully diesel-electric with the CAT3512 main engines acting as generators to power the electrically-driven dredge pumps and hybrid thrusters. 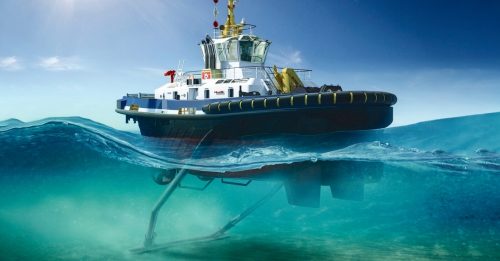 The contract for the two vessels was signed in December 2016 with the WID 2915 due for delivery in March 2018 and the ASD 2310 SD three months earlier in December this year. Since then the build has proceeded well following the extensive engineering phase required to reconcile the dual functions. Combining multiple roles in a single vessel always requires compromises, however, in this project, the merging of dredging and ship assistance duties has gone particularly well, resulting in no loss in performance for either of the two main functions.

Joining Dutch Dredging and Damen in the project is the IJmuiden based Iskes Towage & Salvage, which is Dutch Dredging’s co-owner in the French subsidiary company De Boer Remorquage SARL; the legal entity that owns the vessels. Iskes will provide the towing activities of both vessels and is committed to recruiting and training a number of local staff and crew in the skills required to man and maintain the two new acquisitions in particular and workboats in general. Iskes and Damen already know each other well, with Iskes operating a number of Damen tugs, including amongst others three ASDs 2810, two ASDs 3212 and a Damen ASD 2411. Its operating experience in harbour towing and assistance provided additional valuable input for the design and build process.