Wagenborg Offshore has been awarded a 6-year contract by NAM and SHELL UK Exploration & Production for the provision of a second walk-to-work vessel.

NAM and Shell UK work together in combined business unit on the gas production on the Southern North Sea. The vessel will support its offshore operations. This long-term contract was signed November 13. The so-called ‘Walk-to-Work Emergency Response and Rescue Vessel’ (W2W ERRV) will operate as a standby and support vessel for inspection and maintenance of the unmanned platforms in both Dutch and British waters.

For the provision of the W2W ERRV vessel to NAM and Shell UK, Wagenborg and Ulstein have signed an agreement for the delivery of a standard ‘PX121 Platform Supply Vessel’ (PSV). Built according the Ulstein Accommodation Standard, the PX121 has gained excellent feedback from the offshore industry due to a favourable combination of fuel-efficiency and load capacity. The PX121 is particularly suited for a conversion to other types of services, such as walk-to-work or Emergency Response and Rescue, without comprising her outstanding Dynamic Positioning performance.

On the Dutch shipyard Royal Niestern Sander in Delfzijl, approximately 80 employees will be working on the conversion of the PX121 from a PSV into a W2W ERRV vessel. The PX121 will be equipped  with an additional accommodation module, motion compensated gangway and motion compensated crane to comply the requirements of NAM-Shell. The vessel will be converted in 16 weeks by Royal Niestern Sander and is expected to be delivered to Wagenborg Offshore March 2018. The vessel will start operations in Q1 2018. 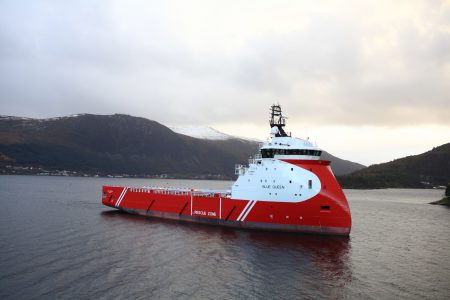