Carbon capture and storage seen by the IEA as a necessary component for the fight against climate change.

Statoil said it would lead a project alongside the Norwegian subsidiaries of Royal Dutch Shell and French supermajor Total in storing carbon dioxide captured from industrial facilities in eastern Norway at an offshore site.

“Statoil believes that without carbon capture and storage, it is not realistic to meet the global climate target as defined in the Paris agreement,” Irene Rummelhoff, Statoil’s executive vice president for new energy solutions, said in a statement.

The International Energy Agency described carbon capture and storage as a necessary addition to other low-carbon energy technologies meant to drive down global greenhouse gas emissions. The process involves capturing carbon dioxide from sources like power plants and storing it in such a way that it won’t enter the atmosphere.

To meet the benchmarks outlined in the Paris climate agreement, the IEA said CCS “will not be optional.”

It’s been 20 years since the start of the first large-scale CCS project, at Sleipner in Norway. The United States, meanwhile, hosts the largest CCS project of its kind, the Petra Nova project in southwest Houston.

The first phase of the Statoil-led project would transport CO2 captured from facilities onshore and inject it near the Troll oil field on the Norwegian continental shelf. Statoil said there are three possible locations under consideration for the receiving terminal and a final decision will be made later this year.

“Shell sees CCS as a transformative technology that can significantly reduce emissions from those industrial sectors that will continue to rely on hydrocarbons for decades to come,” added Monika Hausenblas, Shell’s executive vice president for environment and safety.

Statoil last year was tasked by the government in Oslo to study ways to store carbon dioxide on the country’s continental shelf. The company was awarded a contract from the Norwegian Ministry of Petroleum and Energy to carry out feasibility studies at three offshore locations. It marked the first study of its kind in Europe. 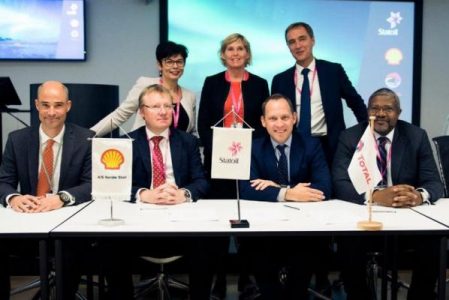 Representatives from Shell, Statoil and Total have teamed up to steer a project that will store carbon dioxide captured from industrial operations in Norway offshore. Photo courtesy of Ole Jørgen Bratland/Statoil.