Ensco recently announced that it has been awarded three drillship contracts offshore West Africa, representing an aggregate three years of contracted term and more than six additional years of options.

Chief Executive Officer and President Carl Trowell said, “Our recent contract awards demonstrate our ability to win work for preservation stacked rigs and newbuilds ahead of the competition. We contracted ENSCO DS-4, a rig that was previously preservation stacked, for a two-year term and reactivated the rig on time and within our cost estimates. We also secured a one-year contract for ENSCO DS-10, our final newbuild drillship, which is among the most technologically advanced rigs in the global fleet.”

ENSCO DS-4 is expected to commence a two-year contract with Chevron offshore Nigeria in August 2017. The contract also includes a priced customer option for one additional year of work. Ensco recently reactivated the rig following a period during which the rig was preservation stacked in Tenerife and reactivation expenses are expected to total $28 million. In addition, $15 million of capital upgrades were added to the rig and are anticipated to benefit the asset over its remaining useful life.

ENSCO DS-10 is scheduled to commence work with Shell offshore Nigeria in first quarter 2018. The contract duration is for one year and includes five one-year priced customer options. As a result of winning this contract, the rig’s delivery is expected to be accelerated into third quarter 2017 from first quarter 2019. ENSCO DS-10 will then undergo a period of acceptance testing before mobilizing to Nigeria to begin its maiden contract. Remaining capital expenditures associated with the rig are expected to total approximately $190 million inclusive of a final milestone payment to the shipyard, an upgrade to add a second seven-ram blowout preventer, acceptance testing, capitalized interest and mobilization.

ENSCO DS-7 is contracted to Total until November 2017. Since November 2016, the rig has been idle in Tenerife earning a standby rate following early termination of its original contract for customer convenience. ENSCO DS-7 is now scheduled to mobilize to Ivory Coast to drill one well beginning in August 2017 that is expected to take 60 days to complete. Additionally, Total has a priced option for one further well. 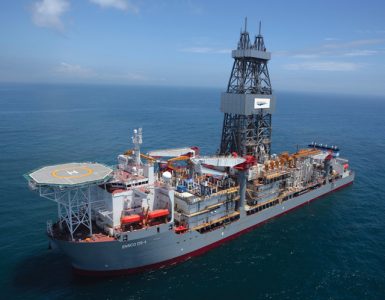