The topside of the Shell Leman BH platform which has arrived at Great Yarmouth for decommissioning. Picture: Veolia-Peterson.

The first offshore structure for decommissioning has arrived at the town’s outer harbour, ready to be stripped down and recycled after the end of its operational life in the Southern North Sea.

The former Shell Leman BH platform accommodation block, known as the ‘topside’, was brought in to the site operated by a partnership of Veolia and Peterson on Tuesday, while its supporting structure will follow later in July.

The contract was awarded to the partnership by Boskalis, which is responsible for offshore removal and transport operations, and is aiming to recycle and reuse 97% of the material in the platform.

Estelle Brachlianoff of Veolia UK and Ireland said: “These are valuable assets in our seas and by decommissioning these platforms we can unlock resources to give them a second, third or even fourth life.

Peterson’s regional director Ron van der Laan said: “This project is a positive sign for Veolia-Peterson in Great Yarmouth, and follows the award of two contracts late last year. It will build on the successes achieved so far and represents a further step towards establishing Great Yarmouth as a centre of excellence.”

The new site has created around 10 jobs, with hopes of more as further decommissioning projects are won. 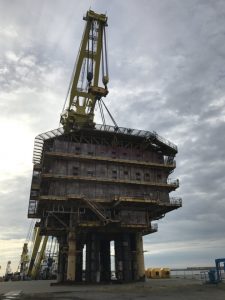