Rhenus Logistics in Rotterdam has officially opened its new quay at the Deep Sea Terminal on the Maasvlakte.

It is about 275 meters on the east side in addition to the 500 meter quay that Rhenus already has on the south side of the terminal. At the Deep Sea Terminal, Rhenus operates 4 harbour mobile cranes of which 2 x 100mt ( in combination 150mt) and a new Kone Gottwald crane (125mt).

With the extra quay, Rhenus increases the capacity and, consequently, the flexibility of the terminal on the Maasvlakte. Rhenus focuses on breakbulk cargoes (such as steel and aluminum packages), project cargoes and offshore related projects. Especially ships in the latter segment are often on the quay for a long time, thus reducing space for other ships.

Peter van der Steen, Managing Director of Rhenus Logistics says: “The new ‘Oostkade’ gives us the opportunity to operate both the offshore vessels of Seaway Heavy Lifting and the Nirint Shipping liner service on Cuba and the Caribbean simultaneously. That’s why we also bought a fourth harbour  mobile crane.” 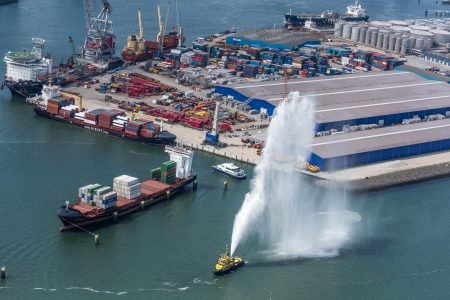