Nearly 65,000 attendees gathered at the annual Offshore Technology Conference (OTC) in Houston, USA, in May 2017.

With 2,470 companies from 43 countries present at this year’s event, OTC 2017 was well received by both exhibitors as well as visitors.

In its nearly 50-year history, OTC is traditionally considered as the prime annual event where the entire global Offshore industry is meeting up. It provides an excellent opportunity for networking and to keep up-to-speed with the latest developments and innovations in the industry.

Connected by the fact of all working in the offshore energy sector, the nearly 50 exhibitors in the 1000 square meter Holland pavilion represented a wide variety of companies; from maritime, shipbuilding and scientific institutions to a vast range of companies in the manufacturing and service-providing industries. They were all presented in the special OTC 2017 edition of the full colour magazine Offshore Holland, which was distributed at the show.

The exhibitors in the Holland pavilion acknowledge their presence at OTC to be of strategic importance as part of their Business Development endeavours and to build up or reinforce their business relationships with new and existing customers from all over the world.

The Holland Network Reception in the Museum of Fine Arts Houston on Monday evening 1 May accommodated more than 350 guests. The guest list comprised of a good representation of guests from the Netherlands, the Dutch Embassies in Washington and Mexico City, the Consulate and NBSO in Houston, as well as many guests from international institutions such as embassies, government representations and global oil & gas companies. 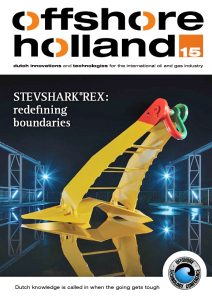