What started with the development of the prototype of the Haliade 6MW offshore wind turbine, and continued through mid-2016 with the installation of the first ever offshore wind farm in the United States, has grown into a powerful partnership in a very fast-moving industry.

Just early April, GE and LM Wind Power celebrated an important milestone with the approval of our acquisition project by the European Commission. We are excited about working closely with a company that has been a key supplier for us for more than a decade. Now, we’ll be local in more places, have further flexibility in both design and supply, and reduce product costs, all of which will fuel competition in the industry and the growth of wind power.

The offshore wind power market is thriving and offers tremendous opportunities across the globe – in France, Northern Europe, Japan, China, Taiwan and the United States. Costs associated with offshore wind output have decreased faster than anybody would have expected and are approaching grid parity in Europe. In the United States, new offshore wind projects for Massachusetts, New York, Maryland, and Rhode Island will add 2GW of energy-generating capacity by 2025.

Recently, China Three Gorges agreed to install three Haliades in China, and the first of 66 turbine nacelles for the planned Merkur North Sea wind farm coming out of the assembly line from GE Renewable Energy’s Saint-Nazaire plant. Last week, I also had the pleasure to join LM Wind Power for the laying of the first stone of its first dedicated offshore wind blade plant in Cherbourg, France. 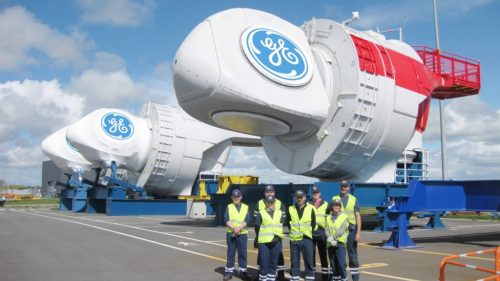 This project has been carried for many years by LM Wind Power and supported by GE right from the start. The facility, which aims at serving both GE and its competitors in the offshore wind business, will create more than 500 jobs by the end of the ramp-up period. It represents a significant investment for France and the Normandy region and a major sign of trust from LM Wind Power and GE in the development of the offshore wind industry. It is also a testimony to the fact that renewable energy, beyond contributing to a better world, can also be an important booster for job creation in port areas.

Partnerships, across the industry and with customers, to create bespoke solutions for very specific power generation challenges are accelerating market growth. Together, GE can operate throughout the entire offshore wind power generation value chain, providing turbines and grid substations as well as individual components to OEMs such as blades.