Decommissioning is set to take an ever bigger share of spending in the energy sector over the next decade, according to industry experts.

Visitors to the East of England Energy Group (EEEGR) conference heard that the proportion of energy industry spending on decommissioning grew from 5% to 7% between 2010 and 2015, with the number set to rise further.

A recent report by Oil & Gas UK showed 67 well platforms are due to be removed in the South North Sea (SNS) and the Irish Sea by 2025, while a further 396 are expected to be plugging and abandoned – an increasingly popular choice in the decommissioning sector which takes up approximately 47% of its spending.

Karis Vieira, a business analyst at Oil & Gas UK, gave a presentation on the body’s most recent Decommissioning Insight Survey – an influential document in the industry – which revealed 39 decommissioning projects are forecast in the SNS as Irish Sea in the next 10 years.

Around 400 of the 1,800 well plugging and abandonment projects planned around the UK and Norwegian Continental Shelf will be in the SNS and Irish Sea, where 80% of sites are platform wells.

Raphael Denis, from Belgian firm EverSea, spoke about new plugging and abandonment technologies being explored by the firm and its parent company DEME Group, including a new jack-up vessel named Apollo which could reduce the cost of the process by 20-30%.

He added that collaborative, multi well projects – which involve operators working together to identify a number of wells which could be plugged in one session – would provide one of the most cost-effective solutions.

“We need to be competitive in this market and deliver a cost effective solution. Collaboration is going to be key in this,” he said.

Julian Manning, chair of the Late Life and Decommissioning Special Interest Group, believed the UK decommissioning industry should “continue to collaborate with the Dutch sector”.

“Decommissioning is a big opportunity that we should be taking now while the market is low.” He added: “There are a lot of skills that are exportable to other regions and we should maximise that.” 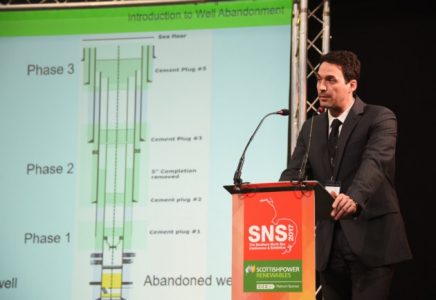